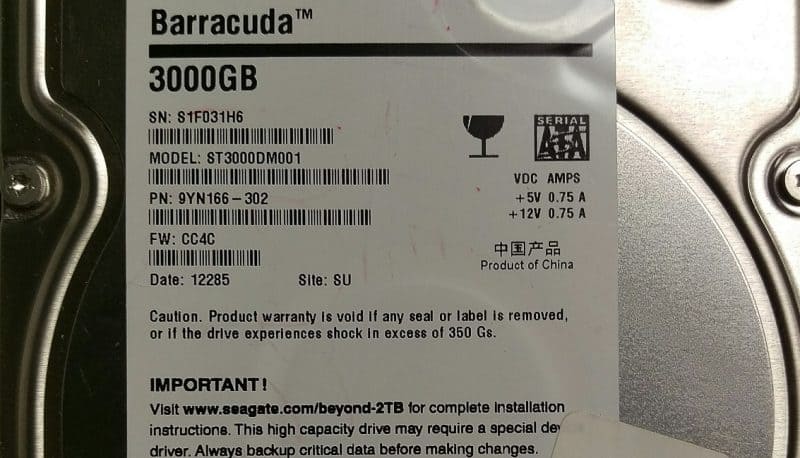 In this hard drive data recovery case, the client had been storing research documents and family photos on an external Seagate Expansion Desktop Drive. One day, the client’s drive took a tumble off of their desk and onto the floor. External hard drives are generally vulnerable to being dropped, and this particular one was no exception. While new drives have accelerometers built into them to mitigate fall damage, when a hard drive is dropped, the results tend to be fatal. The drive failed, and the client brought it to us for our dropped hard drive data recovery services.

Did your external hard drive drop and you need the data on it? Gillware is here to help. Learn More about pricing estimates

The most curious thing about this case is that the hard drive didn’t actually fail right away. It had continued to work, and all seemed perfectly fine. It made no strange noises, and it wasn’t any slower than before. The drive didn’t seem to have any trouble at all doing its daily duties. Fortune had obviously smiled on this drive.

The client, relieved, figured they were all in the clear and kept using the drive. But then, one month later, the hard drive finally died. And when it died, it took all of the client’s data with it!

Our data recovery engineers got to the root of the problem during our evaluation of the drive. The failed Seagate external drive was suffering, first and foremost, from a firmware problem. Before you can see anything on a drive, the read/write heads have to read and make a “handshake” with the firmware.

When this hard drive fell, the client was lucky. The read/write heads only slightly damaged—just enough that they could still function. But the hard drive’s days were numbered. Eventually, the heads made a mistake. They accidentally wrote a bunch of gibberish the allocation table.

The next time the heads found a bad sector, they scurried back to the allocation table to record it. But they couldn’t because the table had been corrupted. The dropped hard drive’s firmware had the equivalent of a kernel panic. Or, to use a more familiar term for Windows users, a “Blue Screen of Death”.

How Firmware Can Kill a Dropped Hard Drive

Hard drives store their firmware on the same hard disk platters they store the rest of their data on. One of hard drive firmware’s many tasks is to keep track of bad sectors. Seagate hard drives keep an allocation table in their firmware. When the read/write heads encounter a bad sector, they go and record that sector in the firmware.

This is an automatic and invisible (to the end user) process. As long as the drive has access to that table, the read/write heads can safely ignore any bad sectors.

Bad sectors can happen as a part of the natural aging process. Eventually, some parts of the magnetic hard disk platters can decay. This results in some sectors becoming unreadable. Damage to the platters or read/write heads can also create bad sectors. When read/write heads begin to fail, they can start reading “bad” sectors. There’s nothing wrong with the platters, it’s the heads that are in the wrong. And when heads start failing, they can write bad sectors too.

The inner workings of hard drive firmware are actually a very closely guarded secret. Hard drive manufacturers don’t want average users, or even typical computer repair or IT professionals, or have access to the firmware. This is because it is extremely complex. One wrong move by someone who isn’t sure what they’re doing can turn a hard drive into a paperweight.

Every model of hard drive has firmware that works a little differently. And some hard drives have much more complex firmware than others. As a result, there’s no easy way to diagnose, troubleshoot, and fix firmware problems. But at Gillware, our data recovery experts have honed their skills over years and thousands of hours of work. We have an intimate understanding of hard drive firmware and how to repair it when it goes wrong.

This dropped hard drive data recovery case turn out very successful. After dealing with the firmware and failing read/write heads, our engineers were able to recover 99.5% of the user’s critical files with our proprietary data recovery tools. Our engineers combed through the recovered files and found no data corruption among the client’s documents and photos. We rated this data recovery case a 9 on our ten-point scale.