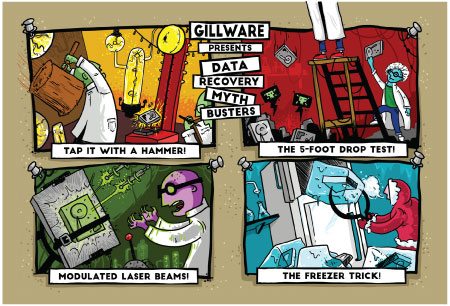 When a customer comes to you with lost data, you probably have a number of different things you try to get their data back. Oftentimes, one method or another will get the customer’s lost data back and the story has a happy ending. But what if their hard drive is more severely damaged, either logically or physically? Maybe you turn to the Internet. While the almighty Google can solve a lot of your problems, not everything you read on the Internet is true, especially when it comes to do-it-yourself data recovery techniques. At Gillware, we’ve heard all kinds of crazy at-home data recovery methods over the years. We’ve highlighted our top four favorite data recovery myths for our own version of Data Recovery Mythbusters:

Data Recovery Myths: Tap It With a Hammer

Inside a hard drive are thin, circular discs made of glass or aluminum called platters, along with tiny metal arms called the read/write head assembly. Platters are covered in a thin magnetic substrate where the user’s binary data is stored. The heads read and write this data by floating just a few nanometers above the surface of the platters. Sometimes, when a drive fails, the heads can get stuck in place. Some people suggest tapping the drive with a hammer to “unstick” the heads.

This is a terrible idea for a number of reasons. First and foremost, the internal components of a hard drive are extremely sensitive. If you hit a drive, you risk further damage to the drive itself. If the heads are stuck on top of the platters, moving the drive at all could cause them to drag across the surface, scoring the magnetic substrate and effectively removing the data written to the platters. Not to mention, if your drive was already malfunctioning enough to have the heads stick in the first place, you won’t want to keep using it and risk another failure later on that could be more catastrophic.

While this may sound crazy, this is a story we heard from an actual Gillware customer. He was holding his failed hard drive and explaining what had happened when a friend asked if he had tried the “five foot drop test.” He then proceeded to take the failed drive and drop it on the ground. Presumably, he was trying to mimic the intended effects of the “tap it with a hammer” myth, but in this case, the results were even worse.

Like we said before, platters are very thin and very easily breakable. When the drive arrived in our lab, it was already what we call a “maraca“, since the platters were shattered and the bits inside made a sort of shaker sound just like the musical instrument. So all in all, five foot drop test? Would not recommend.

I don’t even know what this one means. Someone commented about it on one of our videos once. It was probably one of the more ridiculous methods someone had proposed to us. Maybe they thought the data could be extracted using lasers?

Unfortunately that is not the case, and we can’t extract data using lasers. We usually use our own proprietary software for that.

This is one of the more common myths we hear from our customers. According to the urban legends, if the heads of a drive are stuck on the platters, freezing the drive will somehow shrink the platters and “unstick” the heads. (Don’t ask me, I didn’t make it up.) In any case, this is also not such a great idea.

Placing a hard drive in a freezer and then powering it up can short out the electronics or cause irreparable platter damage due to moisture condensing on the platters. Hard drives are designed to operate within certain environmental conditions. Extreme temperatures place the drive outside of its design specifications and can lead to rotational scoring.

Most tutorials (and rebuttals to this myth busting) mention putting the drive in a Ziploc bag to prevent condensation. However, even powering up a failed hard drive runs the risk of scoring the platters and causing data to be lost forever. So why take the chance with valuable data?

We know you can handle a lot of different data recovery scenarios on your own. But when you come across a case that’s beyond what you can handle in house, that’s where we come in. Become a Gillware Data Recovery Partner and you can receive a 10-25% commission on successful cases you refer to us.