Do you need Server Data Recovery? Servers are meant to run continuously, without any interruption. Interruption means downtime. Downtime means whatever function you depend on your server for grinds to a halt. If your server crash results in lost data, you have more to worry about than just downtime. Losing valuable data due to hard drive failure in your server RAID array can be a severe setback for your business.

When you lose data from your server, it’s mission-critical to get your data back as soon as possible. Application servers host web apps, allowing users to run software through their internet browsers. Database and file servers store massive amounts of information, which can be accessed by multiple people. Game servers allow people from all around the world to play online together. Email servers allow people from all around the world to communicate with each other. When you binge-watch your favorite TV series on Netflix, your video is coming from a media server. While you do this, the website itself is hosted on a web server. The entire Internet depends on servers for just about every facet of its existence. It’s hard to think of something you do on a daily basis that doesn’t involve somebody’s server somewhere in the world. Servers make the world go ‘round.

Send us an email including the type of phone you have and the problem you are experiencing. A client advisor will respond within 25 minutes during business hours (M – F: 8am – 7pm; Sat: 10am – 3pm).

Have a quick question about the data recovery process? Use our chat feature to chat with one of our client advisors (not a robot!) during business hours (M – F: 8am – 7pm; Sat: 10am – 3pm).

Want to schedule a call for a time that is convenient for you? Click the button above to schedule a brief consultation with one of our client advisors. 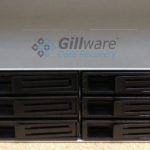 This Synology RackStation RS3412xs server was brought to Gillware for data recovery. If you’ve lost any of the data on your server’s hard drives, our server data recovery technicians here at Gillware can get it back for you.

What Is a Server?

A server is a program or device that acts according to a server-client model. You, the client, send a request to the server, and the server fulfills it. Servers share data and resources in order to handle the many tasks and services we rely on as we go about our daily lives.

A server machine is a computer, but it doesn’t much resemble the computer you sit in front of at home or at work. Servers don’t have screens or keyboards. They are designed to perform their tasks unattended and are managed remotely from another computer workstation. Unlike your computer, servers are kept running all the time. Twenty-four hours a day, seven days a week. A small business may have one or two servers. A massive business may have dozens or hundreds clustered together in massive server farms. And unlike your computer, a server will have many hard drives instead of just one. These hard drives will usually be special enterprise-class hard drives.

Enterprise-class hard drives, such as Hitachi Ultrastars and Seagate Constellations, are optimized specifically to run continuously and in sync with other hard drives. This is just what a server needs. You probably won’t see enterprise-class hard drives inside a consumer NAS device you can pick up at Best Buy, but for servers such as the Dell Poweredge, HP ProLiant, or Acer AT350F2, hard drive performance and longevity is paramount.

What Can Cause Data Loss from a Server?

Servers are fairly autonomous. It can be easy to get in the habit of “out of sight, out of mind” as the server does its job. But just like any other data storage device, servers can fail, crash, and break down.

There are many ways a server can fail. Any server failure will result in some downtime for your business, but not all failures result in data loss. A failure of the hard drives beyond the tolerances of your RAID array will result in data loss. Data can also be lost through accidental or purposeful file deletion from the server. Hard drive failure is by far the most common reason clients come to us in need of our RAID server data recovery services.

The hard drives in a server are arranged as a RAID array. A popular configuration for servers is RAID 5, which provides fault tolerance in the event that one hard drive fails. Some businesses set up their servers with complex nested RAID levels. Nested RAID arrays such as RAID 50 can tolerate the failures of several drives.

That said, any hard drive, enterprise or not, will still fail sooner or later. And no matter how many fault tolerances a RAID array has, it can fail as well. A hard drive in a server that is constantly running will eventually work itself to death as its components wear themselves out. It is not a question of if, but rather of when.

Server failure by itself will not cause any data to be lost from the hard drives. However, an unexpected shutdown may cause one or more hard drives to fail. A server can fail if the space it is kept in is not properly ventilated or air-conditioned.

All electronic devices normally generate heat. You’ve probably felt how hot your phone or laptop can get after prolonged use. If that heat is not allowed to properly dissipate, your server can overheat. This will eventually cause some internal component to fail. The components inside your server can also fail as a result of natural wear.

If the RAID card used in your server is a particularly old and difficult-to-find model, you may not be able to find a suitable replacement. Hard drives in a RAID array contain metadata which tells the controller how the drives are meant to fit together. A different model of RAID card cannot properly interpret this metadata. In this rare case, you could be effectively locked out of the data on your own server.

If this happens, taking the hard drives out of the server and trying to read them individually won’t do much good. The data on your server RAID array cannot be accessed on individual drives. To rebuild RAID arrays, our data recovery technicians must analyze the metadata on the hard drives and use custom emulation software to do the job of the RAID card.

Somebody could delete files from your server, either on accident or on purpose. Files that have been deleted from data storage devices are irretrievable by normal means. However, our logical data recovery engineers here at Gillware have developed extremely powerful methods for retrieving deleted files.

One common use of servers is to provide email services and store SQL relational databases. When these servers fail, or the databases inside become corrupted and unusable, the results can be devastating. Fortunately for you, though, our server data recovery engineers can help you. Whether it’s a crashed server or corrupted data locking you out, Gillware provides Exchange Server recovery and SQL Server recovery services.

If you would like to contact us to receive a no-pressure consultation, click the button below. This will take you to a page with our phone number and email. This page also provides you with the option to schedule an appointment with a Client Advisor at a later time or date, or chat with them online.

Click the button below if you would like to send in your device. Sending in your device is financially risk-free. You will be asked to fill out a short form. Once you have completed the form, we will send a shipping label to the address provided. After we receive your device, we will begin a free evaluation and contact you with a firm price quote.

Send in Your Device