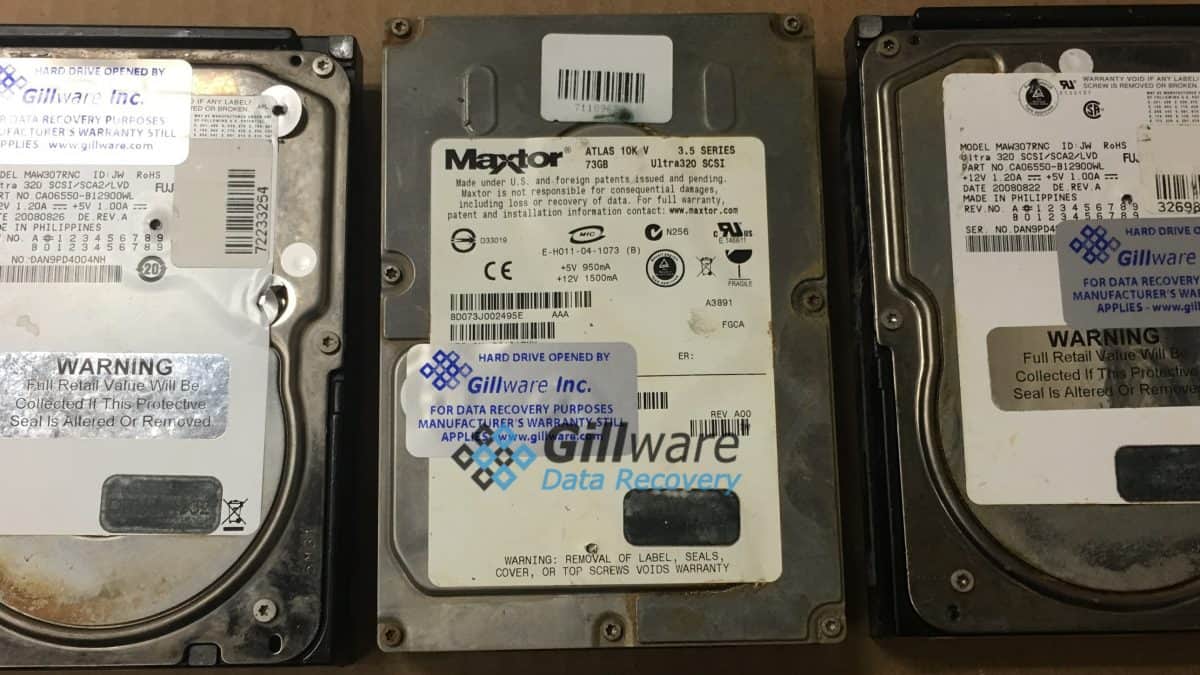 The client in this peculiar RAID-5 server recovery case had pulled three 72-gigabyte SCSI hard drives (two Fujitsu, and one Maxtor) from their RAID-5 server. Some kind of fluid had been dumped on the server box containing the client’s drives.

At first, the computer repair technician who brought the drives to us on the client’s behalf believed that someone had sprayed lubricant into the server machine. But then the substance began eating away at the server box, the table, and the carpet below it. 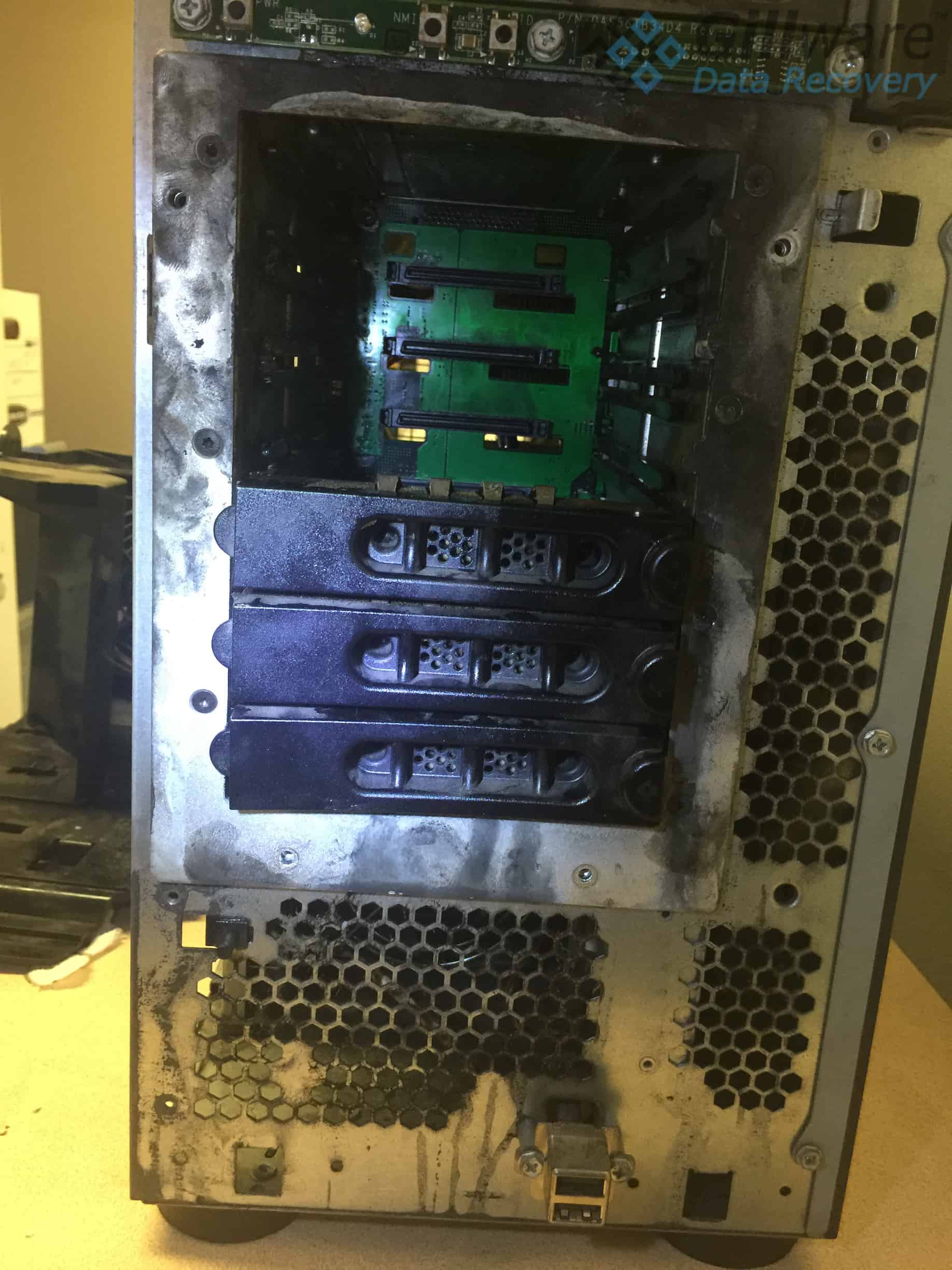 The RAID-5 server box shortly after the incident 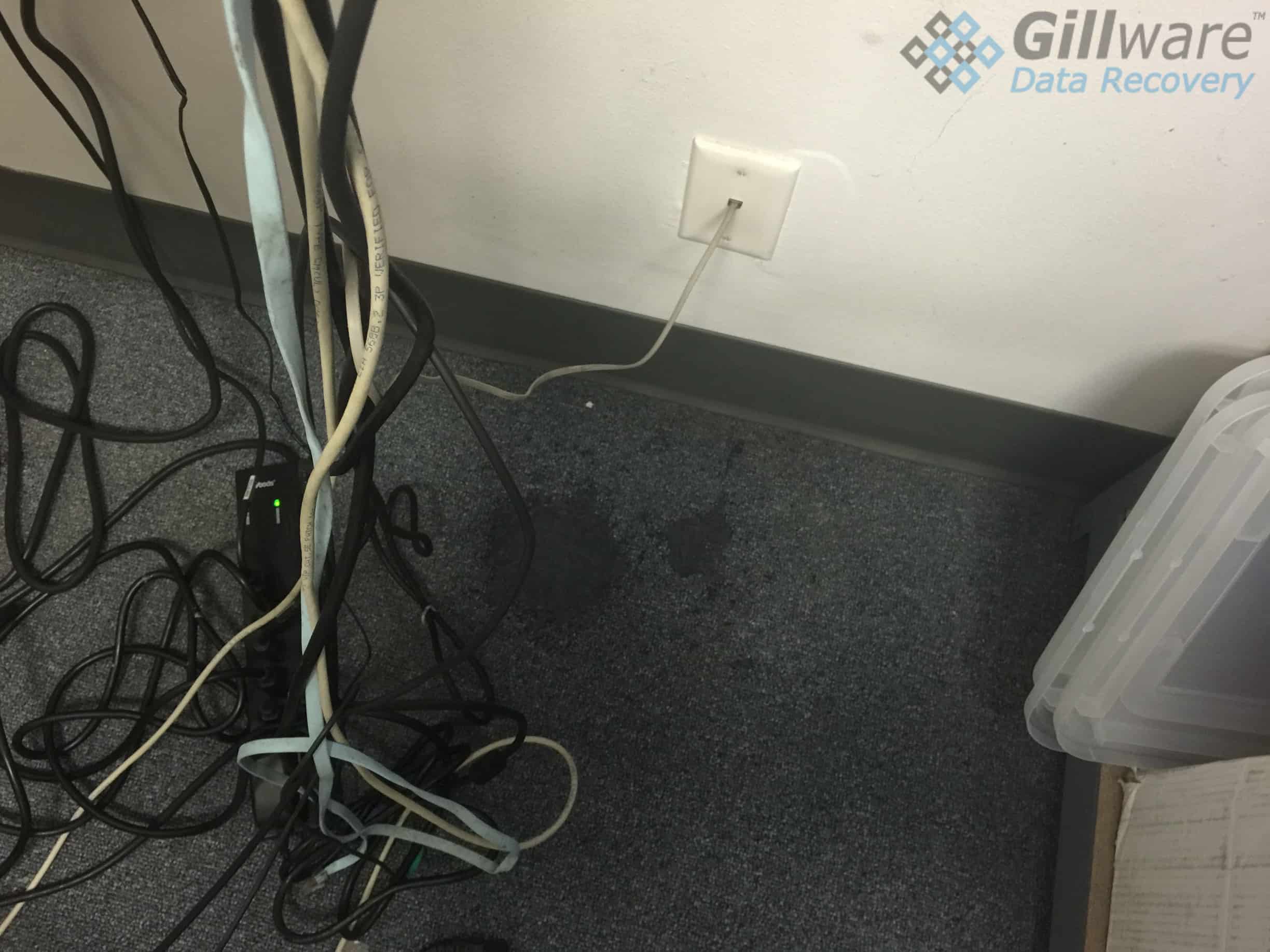 The condition of the RAID-5 server box and surrounding area has actually worsened considerably since these two pictures here were taken by the client. The carpet and table underneath where the server box had been now vaguely resemble the decks of the Nostromo.

This acidic substance had gotten all over the three hard drives in the RAID-5 server. The computer repair technician cleaned off the hard drives as best they could before bringing the drives to Gillware. Even so, the substance was still potent enough that exteriors of all three drives accumulated more and more rust on a daily basis.

We’ve received heavily water-damaged hard drives before. By the time the case was finished, these hard drive looked like they’d spent a while submerged in water.

We could practically see the hard drives decaying before our very eyes. More than one of us were reminded of a certain scene from an Indiana Jones movie.

When our data recovery engineers received this case, the hard drives had to be set aside from the other hard drives and stored outside the cleanroom. Our senior cleanroom engineer Mike wore a ventilator mask while working on the hard drives just in case they gave off any caustic fumes. If our engineers worked on the drives for extended periods, their sterile gloves would actually start to dissolve.

Inspection of the interior components of the three hard drives revealed that the corrosive substance hadn’t caused much damage to the data storage platters. This was a relief for all of us here at Gillware. However, the drives’ read/write heads hadn’t been so lucky. A small amount of corrosive fluid had seeped into the hard drives, complicating this RAID-5 server recovery effort. The fluid had eaten away at the read/write heads’ preamp connections. Each drive had to have its magnetic read/write heads replaced. 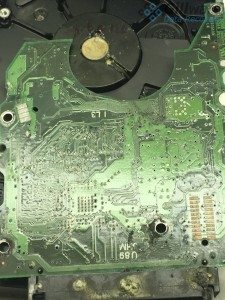 One of the hard drive PCBs being removed

As far as the exterior components of the hard drives fared, the hard drives’ PCBs were unusable. Nobody would want to plug these into our data recovery machines and risk damaging any equipment.

The process to recover data from these liquid-damaged hard drives was a race against time. In order to get the hard drives functioning again in what little time they had left before they shed their mortal coils, Mike removed the boards and took off the ROM chips containing each drive’s unique calibrations so he could solder them to new, compatible boards. 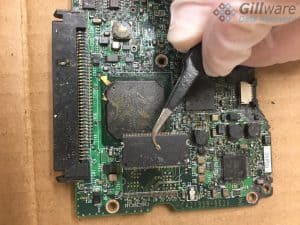 By the time Mike removed the ROM chips, the acid had already eaten through enough of the solder on some of the other components of the PCB that they could simply be brushed off of the board with a light touch. The greatest danger here was that the leads on the ROM chip would be eaten away as well. The leads allow signals to travel from the chip into the PCB and vice versa. If this happened, it would reduce the critical—and utterly irreplaceable—ROM chips to inert and useless black rectangles. 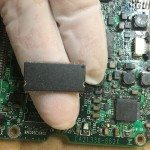 The ROM chip taken from one of the hard drives’ PCBs

The ROM chips were still in good shape, so by soldering them to functional boards, Mike was able to get two of the three acid-afflicted hard drives up and running again. Using our in-house data recovery tool HOMBRE, we were able to make 100% disk images of the two hard drives. Fortunately, this hard drive was arranged in a RAID-5 configuration. We only needed two of the three hard drives fully imaged to access all of the client’s data.

A RAID is a redundant array of independent (or inexpensive) disks. RAID arrays link multiple hard drives together to function as one. One of the more popular RAID configurations is RAID-5, which not only provides increased data storage capacity, but also provides fault tolerance, protecting its user from data loss in the event that one drive in the array fails. RAID-5 arrays cut all of the data written to them into stripes and spread them equally across the drives comprising the array. It also writes a little bit of extra data across the drives.

This extra data is in the form of “parity bits”. The RAID controller uses these along with a clever application of XOR logic to recreate any data that goes missing if one drive in the array fails. A RAID-5 array can back up all of the data on the array, regardless of how many drives make up the array, using only the equivalent of one drive’s worth of space.

It should go without saying that a RAID-5 server recovery rarely involves the hard drives rusting away before our very eyes. The client in this case was fortunate to have gotten the afflicted drives to us as soon as they did. Our data recovery engineers were able to get the acid-damaged drives into working condition and salvage the files from them quickly. But if a few more days had passed, this RAID-5 server recovery story could have had a less happy ending.

In any case, we hope our client does not run afoul of any xenomorphs in the near future.