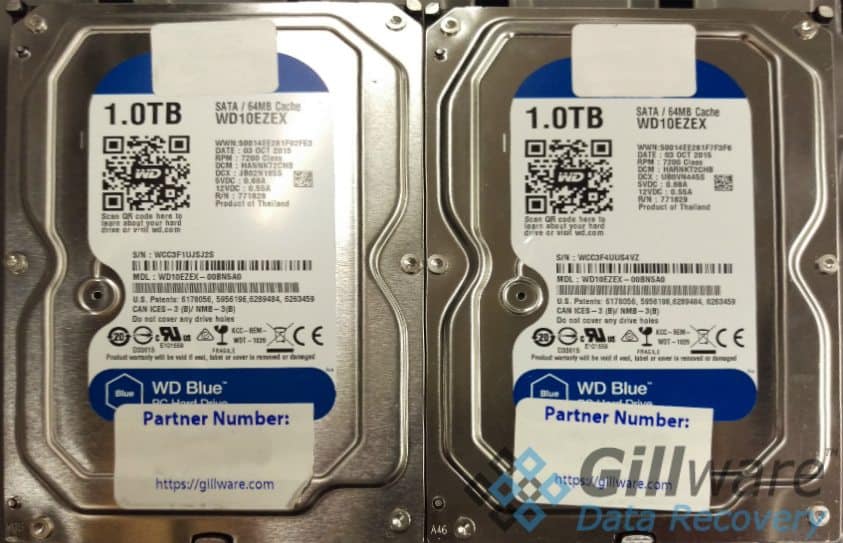 In this RAID-1 data recovery case, the client had been storing their critical documents on a mirrored RAID array as a form of local backup. When they upgraded their desktop PC to Windows 10, they found that after a reboot their RAID-1 no longer showed up on the PC. The client removed both Western Digital hard drives from the RAID enclosure and plugged each in individually to try to get the data off. However, both hard drives showed up as blank on the PC and prompted the user to reformat them. The client sent their failed RAID-1 array to Gillware Data Recovery to get their documents back.

The Problem with RAID-1: When Local Backup Isn’t Enough

RAID-1 combines two hard drives to create what, at a glance, appears to be the ultimate local backup. When you connect two hard drives in a RAID-1 array, they become identical twins. Every change you make to the data on one immediately gets written to the other as well. You don’t even have to think about manually backing up your files, or setting up a schedule for backup software to copy over your files. The process happens automatically, and constantly.

But RAID-1 arrays can fail, and when they do, your backup goes poof. In many cases, when a RAID-1 array fails, one drive has failed first, and the user has not received adequate notification of the failure. Months go by without the user noticing, and then the second drive finally fails. It is rarer for both hard drives to fail at the same time, and usually happens due to some sort of external trauma.

It’s hard to get more local of a backup than RAID-1, considering both hard drives are right next to each other. But this form of backup is sometimes just too local. What happens to one drive holding your data can easily happen to its twin, from file deletion to flood and fire damage. And if the RAID-1 enclosure takes a tumble from your desk, both hard drives suffer the same impact.

When a RAID-1 enters our data recovery lab, our engineers must examine both drives independently. This is a precaution our engineers always take, since in the majority of RAID-1 data recovery scenarios, the drives do fail multiple weeks or months apart, and the user’s critical data may only exist on one drive. Even if the hard drives only fail a few minutes or seconds apart from each other, critical data that exists on one may not exist on the other. And if one or both of the drives have been severely damaged to the point where some data on both is unrecoverable, a combination of recovered data from both drives may be what the client needs.

Our engineers discovered no signs of physical failure in either hard drive, and so we focused on recovering the data from the most recently failed hard drive.

What had happened to this client’s mirrored RAID-1 array to make both hard drives seem empty? Was their recent Windows 10 to blame? Once our data recovery experts had taken a look at both of the client’s Western Digital hard drives, we knew the answers to both of these questions.

Secondly, no, Windows 10 was not to blame, or at least not directly or in whole. The chances of your operating system directly causing a hard drive crash are incredibly slim. However, the upgrade may have inadvertently caused the two drives in the client’s RAID-1 to fail when the machine rebooted. The reboot may have corrupted both partition tables at the same time. It is rare for partition table corruption to happen to a single drive; to happen to two drives at once indicates a particular predilection towards misfortune.

After reading 28% of both hard drives, our engineers determined that both were identical, indicating that they had failed at exactly the same time. We salvaged 100% of the client’s data and returned it to them safe and sound, rating this case a 10 out of 10. Due to the client’s seemingly exceptional bad luck, though, in addition to backing up their data remotely, they may want to be extra careful around ladders, mirrors, black cats, and cracks on the sidewalk.