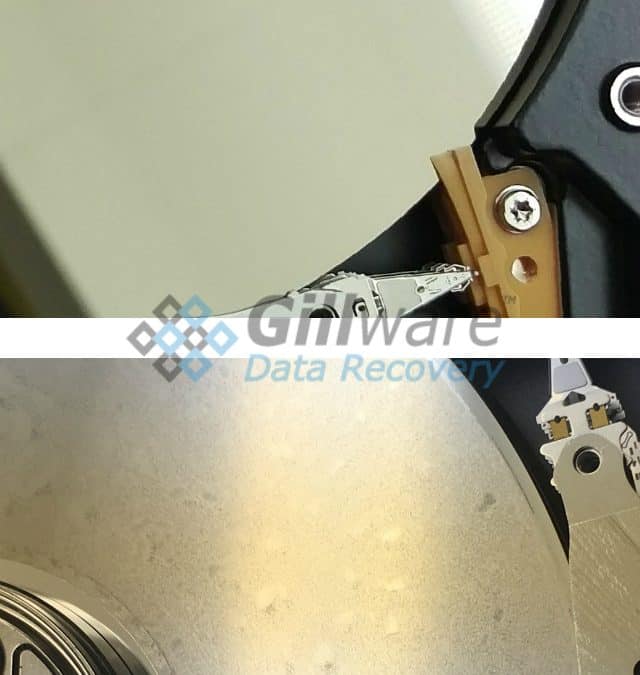 Top: A healthy hard disk platter, with a perfectly reflective surface. Bottom: A hard drive platter with a foggy surface due to platter damage.

The client in this Western Digital HDD repair case needed pictures and documents recovered from their 320 GB Western Digital hard drive. The drive had failed, producing an audible, rhythmic clicking noise. For a hard drive, clicking is one of the most iconic sounds of failure. If computer repair is your line of work, you can probably pick out the “click of death” on sight (er, sound).

Hard drives are naturally noisy creatures, although most modern ones are relatively quiet. (Old Maxtor and Hitachi hard drives especially can make quite a racket, though, even when they are healthy.) When a hard drive’s read/write heads unpark and position themselves above the spinning hard disk platters, a single click usually accompanies the movement. Our engineers sometimes refer to this as the “happy sound” because it means that the heads have positioned themselves properly over the firmware sectors and made a handshake with the drive’s firmware.

When a hard drive fails, it will often produce a rhythmic ticking noise. Your hard drive has decided to quit its job as a data storage device and begin a new career as a metronome. The rhythmic ticking comes from the read/write heads as they fly over the platters. For some reason—usually heads failure—the read/write heads cannot make contact with the firmware. And so they blindly fly back and forth over the firmware sectors. The heads produce an audible click every time they complete one round-trip across the hard disk platters’ radius.

Single clicks are usually good news. They’re a sign that, at the very least, the read/write heads can read data. (Whether or not the data is there, or makes sense, though, is another story.) The bad news comes when your hard drive decides to give you its best impression of a grandfather clock.

Hard drives can make much nastier noises than these light clicks. When a hard drive produces exceptionally loud clicks or grinding noises, it is usually a sign that the read/write heads have suffered a catastrophic failure, and the data storage platters may be at risk.

As soon as the clicking Western Digital hard drive came into our lab, our cleanroom data recovery technician Kirk inspected the drive’s internal components. Kirk found that something peculiar on the hard disk platters. Hard disk platters are coated with metal alloys and burnished, giving them a mirror shine.

A healthy set of hard drive platters is free of dust and debris, making the platters perfect mirrors. These platters were not perfect mirrors. Their surfaces had what appeared to be a cloudy, hazy film over them. We discovered that, in an attempt to fix the drive, the client had put it in their freezer and let it sit before trying to power it on again.

The “Freezer Trick”, and Why Not to Do It

At Gillware, our data recovery experts tend to frown on most forms of DIY hard drive data recovery. DIY data recovery myths, such as simply swapping control boards or tapping misbehaving drives with hammers, tend to be misguided and outdated at best and destructive at worst. We dislike the freezer trick in particular.

When you need data recovered from a hard drive with corrupted or deleted data or a reformatted drive, data recovery software can be a low-risk tool as long as it’s used carefully. But when a hard drive is clicking or making other unusual noises, do-it-yourself data recovery is extremely risky business.

A major threat to hard drives, especially freezer-cooled drives, is moisture in the air. For example, hard drives cannot be safely run if the relative humidity of the air around them climbs past 90%. When you freeze a hard drive, any moisture in the air on the inside or the outside of the drive will condense into liquid water, and then freeze. And then when you remove the drive from its icy tomb, the hot air will immediately start to melt the frozen water.

Water is bad for hard drives. If it condenses on the platters, it can corrode them, and can also easily cause head crashes and severe rotational scoring. If it condenses on the drive’s control board, it can cause an electrical short. Even double-bagging the drive (as “freezer trick” proponents suggest) will not remove all water vapor from the drive. A rapid change in temperature can create even the smallest amounts of condensed moisture inside your hard drive, which could cause massive internal damage.

There are a very limited set of scenarios in which a failed hard drive will start working again after you’ve cooled it down to subzero temperatures. If the control board is burned out, subzero temperatures will not un-fry it. Nor will they un-stick crashed read/write heads or stuck spindle motors, magically repair rotational scoring, or somehow undo logical corruption. Your icebox is not a hard drive cure-all.

Winter is coming. Please don’t leave your hard drives out in the cold.

This WD hard drive’s frozen platters might have been a death sentence only a few years ago. But our data recovery experts were not going to let this case go. In their current state, with condensed moisture fogging up their mirrored surfaces, these platters were unreadable. Read/write heads are tiny, and hover only a few nanometers above the surfaces of the platters. To them, even tiny droplets of water are massive. Running the drive would be like flying a plane into a mountain.

To proceed with this Western Digital HDD repair case, the platters needed to get their mirrored shine back. Fortunately for our client, we have the tools to do it. After some careful polishing and a round in our state-of-the-art glide burnishing equipment, the hard disk platters once again had their natural luster.

From that point on, it was a simple matter of replacing the failed read/write heads with a new set from a compatible donor. Sometimes, finding a compatible set of donor parts can be difficult due to the tiny variations between otherwise-identical hard drives. But in this case, it only took one set of replacement parts to recover the client’s photos and documents. After reading 55% of the sectors on the drive’s platters, we had 99.9% of the client’s data and all of their critical files. We rated this Western Digital HDD repair case a 9 on our ten-point rating scale.

If you still feel like trying the freezer trick for yourself, watch this classic video of our president Scott Holewinski demonstrating what can happen to the platters in a Western Digital hard drive if you run it after letting it sit in the freezer: