A Brief History of Hard Drives

7 Things IT Professionals Hate to Hear 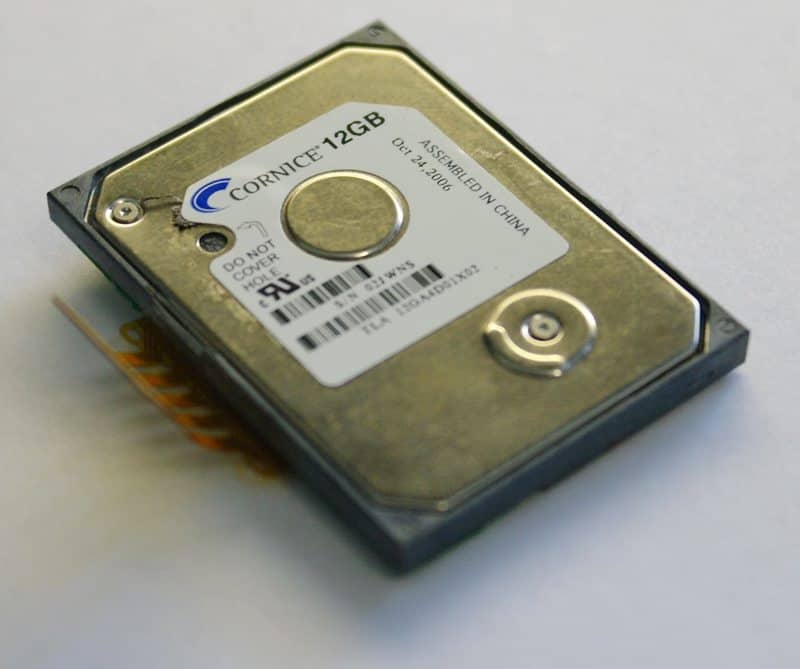 Two years ago, Western Digital began shipping their new UltraSlim hard drives, which are roughly half as thick as the standard laptop hard drive — 5mm versus 9.5mm. That put them in competition with solid-state drives to fit into tight spaces, such as Ultrabooks. They also cost quite a bit less. At the time, they ran $89 for 500 GB, versus roughly $350 to $400 for an SSD of the same capacity.

Nowadays, the story is a little different considering SSD prices are just about half the price they were two years ago. However, the WD UltraSlim drives have gone down in price as well: around $50 for 500GB and $85 for 1TB.

This is not, naturally, the first time that a hard drive manufacturer has seen an opportunity to capture market share by making smaller hard drives.

A great example of a little hard drive is this one made by Cornice. This tiny model holds 12GB on a single platter that measures one inch in diameter. The hard drive is not that much bigger than a standard SD card or a postage stamp.

It is, in the words of one of Gillware’s clean room engineers, the cutest hard drive ever made.

This one was sold in an external enclosure, with a USB connection, so that it could be used as you would use a thumb drive today. It’s about the same length as a common thumb drive, but wider — closer to square.

Before it made external drives like this one, Cornice saw a different promise for their tiny design: mobile phones. Cornice was founded in 2000, and almost immediately saw its drives used by three manufacturers of MP3 players. Despite this attractive surge in business, it was the vast number of mobile phones that captured the attention of Cornice.

By late 2002, Apple was pursuing Cornice and wanted the exclusive use of their hard drives for their next device: the iPod Mini.

Negotiations between Apple and Cornice went on for several months. As much as Cornice wanted the Apple contract, their interest in the phone market, their existing contracts with MP3-player manufacturers, and many other pending contracts ultimately kept them from entering into exclusivity.

When the iPod Mini launched very successfully in 2004, it had a one-inch hard drive inside called the Microdrive, developed by Hitachi. Cornice looked forward, and with the support of its board, focused on the mobile phone market. Analysts at the time generally looked favorably on Cornice’s strategy, saying that the mobile market was much larger and had greater potential than music players.

One analyst, though, sounded a note of caution. He was right about doubting whether hard drives would make their way into phones, though for a very wrong reason:

Going with cell phones wasn’t a bad move, since that market will always be larger than the MP3 player market. The question is, how many consumers will want a cell phone with 10 gigabytes of storage, with music, photos, video, GPS? There will be cell phones with hard drives. But will there be hundreds of millions of them? I’m not convinced of that at this point.

I’ll let him remain anonymous since hindsight in the technology industry is pretty unforgiving, and his peers were further off the mark.

As competitors swirled to drive down prices and increase capacity in tiny hard drives, Cornice developed and marketed their drives’ ability to survive falls. They figured that was the key to success in the phone market.

Spinning hard drives are very vulnerable to bumps and collisions — the read/write heads are separated from the platters’ surfaces by an incredibly thin film of air and if they touch the spinning platters, it often means a failed device. Cornice said their drives could withstand a fall of 1.5 meters.

Naturally, at the data recovery lab, we don’t see the ones that survived the fall, and reviewers at the time commented favorably about the resiliency of Cornice drives. But there have been plenty of Cornice hard drives that have arrived here with a read/write head jammed up against the platter, which is frequently and unfortunately accompanied by rotational scoring. Perhaps when the fall is substantial enough to crash the heads on a Cornice, it’s substantial enough to make a complete mess of any other drive. Regardless, Cornice’s are still capable of head crashes.

And speaking of messes, Cornice ran into other challenges in addition to the unpredictability of the mobile phone storage market.

The company, which was based in Longmont, Colorado, faced intellectual property lawsuits from Seagate, which also has a substantial presence in the same city. Longmont is actually somewhat of a hotbed for hard drive companies. In addition to Cornice and Seagate, MiniScribe — the company famous for this “brick” scandal — also called Longmont home.

A lot of lore surrounds the disagreements and lawsuits Cornice faced from its competition. One settlement with Seagate was reached in 2005, but other lawsuits ground on. By 2007, Cornice — once the apple of Apple’s eye — was out of business. And so it goes.

Maybe it’s a story of missing the mark on mobile phone storage just as solid-state memory was taking hold. Maybe it’s another tale of intellectual property lawsuits playing out in the technology industry. Or maybe it’s just that saying no to the iPod Mini is a case of being too cute by half.