The Best Endorsement: From a Mom 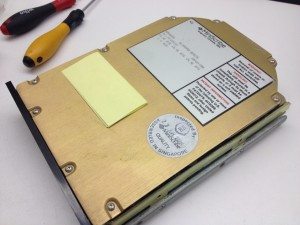 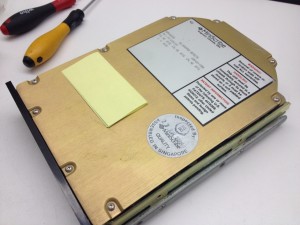 An old hard drive made by a company with a notorious history arrived at the Gillware data recovery lab today. Big, heavy and full of solder points that make it feel like a starfish on one side, the MiniScribe hard drive came off the assembly line around the same time Madonna recorded “Like a Prayer” and Florence Griffith-Joyner was setting records at the Seoul Olympic Games.

We wonder if this series of hard drives – made by a company based in Longmont, Colo. – is responsible, or at least partly responsible, for a more recent definition of the word “brick.” As a noun, a brick is a piece of technology that no longer works. For example, the smartphone that you got wet is a brick, as is your non-spinning hard drive. It also gets used as a verb, as in to ruin: You bricked your laptop with a bad power supply.

It’s easy to see why the word brick would be used in these cases: it’s a great metaphor. The nonworking electronic device is now simply an inert rectangular mass. But maybe the origin was a bit less metaphorical and a bit more literal than that.

Consider what happened with MiniScribe hard drives. According to news accounts from the time, MiniScribe ran into a financing problem. The company needed money to make more hard drives, but no one was lending to them.

MiniScribe didn’t have hard drives to fulfill orders, but they decided to take orders anyway. That way they could collect money and deal with their financing challenges.

The drives that would fill the orders would be serialized units that would sit uninspected at a warehouse in Singapore for a while. That presented MiniScribe with their fraudulent opportunity: After collecting payment, MiniScribe planned to recall all the sold units by serial number while they remained in the warehouse. The hope was that this plan would give them enough time to turn the money from orders into real hard drives.

In the meanwhile, they just needed something to put into all those boxes that would go to the warehouse to later be recalled. I think you can guess what they used!

A Wikipedia editor delivered the punchline with great dryness: “The decision was made to ship pieces of masonry inside the boxes that would normally contain hard drives.”

That’s right — bricks! You opened those hard drive boxes and you got bricks. Before they actually resorted to “pieces of masonry,” they were placing nonfunctional, obsolete or broken drives in the boxes. But it was the bricks that really captured headlines and imaginations.

The scheme evidently fell apart because MiniScribe was simultaneously laying off workers and going through all sorts of other trouble. Among those laid off were staffers in charge of shipping and warehousing. As soon as they were let go, they told the press about the bricks inside the hard drive boxes. The stories hit just before the holiday season. MiniScribe went bankrupt as huge accounting scandals unraveled and what assets remained were later bought by Maxtor (makers of the famous musical hard drives, who are also now out of business).

Whether this famous episode contributed to the usage of the term brick is purely speculation on our part. I could not find the usage of brick to describe nonfunctional hard drives that pre-dated this incident in the late 1980s, but maybe it’s out there. Word origins are tricky; very often some story about how a word came to be is a false assumption or apocryphal. But the mysteries are fun.

Our work ahead is to un-brick that MiniScribe and try to get our client’s data back. If any reader has a background in etymology or can support or disprove our speculation about the word brick, we’d love to hear from you!