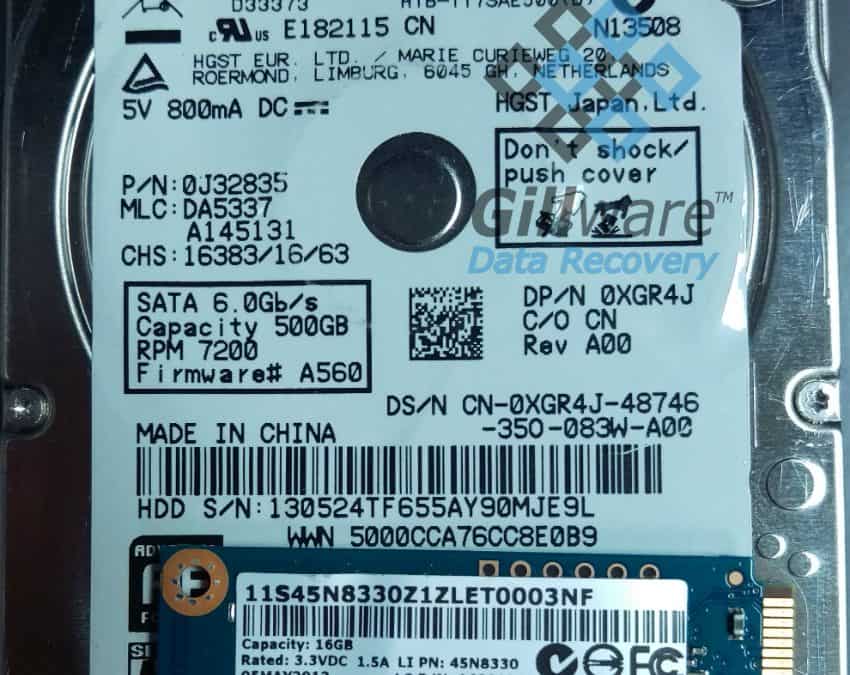 The client in this data recovery case came to us for our Hitachi hard drive repair services. In their computer they’d had a 500 GB Hitachi hard drive storing their data and a 16 GB SanDisk solid state drive doing some of their heavy lifting. But while the two drives worked in tandem, one was obviously more important than the other. When the Hitachi hard drive started clicking, the whole computer went down.

When a hard drive starts clicking, there’s no time to lose. The drive needs expertly-performed surgery, and it needs it done ASAP. There’s no telling from sound alone what shape the drive might be in “under the hood”. It takes Hitachi hard drive recovery experts with world-class skills and technology to salvage data from the drive. When this client’s Hitachi hard drive failed, the specialists in Gillware’s world-class data recovery lab were on the case.

When Two Drives are Better Than One…

The client in this Hitachi hard drive repair case didn’t just have one hard drive in their computer. They also had an M.2 PCIe SSD connected to their motherboard as well. The SSD was more than just another storage device. It fulfilled a special function. Instead of just using it as extra space, the client could use it as a cache.
In your computer, a cache stores data so that you can quickly and easily bring it up again when you need it. Your CPU and GPU have their own dedicated memory to speed up their performance and reduce load. Your Internet browser also caches data, allowing you to load frequently-accessed web pages more quickly (and cut down on the bandwidth you use!).

With the explosion of solid-state memory, hard drive and computer manufacturers have tried a lot of tricks to combine hard disk drives with SSDs. Hard disk drives are cheap for their capacity, while high-capacity SSDs still cost an arm and a leg. When you want ample storage space and blazing fast speeds, what can you do?

Different manufacturers have different solutions. Some hard drive manufacturers have attached NAND chips directly to their hard drives, providing up to a dozen or so gigabytes of storage space that can act as a high-speed cache. Apple’s Fusion Drive technology seamlessly combines a single SSD with a high capacity hard drive. Some solutions, like Intel SRT, allow an SSD to act as an intelligent cache, analyzing the user’s most frequently-used files and storing them on the SSD so the user can retrieve and work with them quickly and easily.

…And When They’re Not

In this data recovery case, the client’s SSD was set up as a cache for their main HDD. The SSD stored some of the client’s most frequently-used files, as well as frequently-accessed program files and operating system files, so the computer could boot up and run programs more quickly.

However, when the HDD fails, that’s another story. The SSD is just a cache; it can’t do much on its own. Your computer still needs the HDD to boot from, even though the SSD takes care of a lot of the heavy lifting. And so, when this client’s Hitachi hard drive started making the dreaded “Click of Death”, it was time for them to call on some Hitachi data recovery specialists.

There’s a reason the steady clicking noise this hard drive was making gets called the “Click of Death”. In clicking hard drives, the sound comes from the read/write heads as they sweep back and forth. Normally, your hard drive clicks once upon startup when the heads leave their ramps and fly over the platters. When the heads can’t read anything, they leave their ramps, fly over the platters, and come back. This happens over and over again, producing the characteristic tick-tick sound. For this reason, the “Click of Death” is synonymous with head failure.

This clicking Hitachi hard drive was in very rough shape. Our engineers found heavy scoring on several surfaces of the drive’s delicate hard disk platters due to the mangled read/write heads. In any other data recovery lab, this would have been game over; platter scratches lead to dust flying around and sticking to the healthy sections of the platters, ruining their smooth surfaces. But with Gillware’s platter burnishing tools, our engineers could take care of the dust and make the platters shine again.

After burnishing the platters and replacing the mangled set of read/write heads with a donor set, our engineers no longer had any clicking to worry about. However, there was an additional problem with the drive’s firmware. Normally, upon startup, a hard drive will look for its firmware and, upon finding it, automatically load it into its RAM and go about its business. But in some cases, the hard drive can’t perform this task on its own. In these situations, our engineers must manually guide the hard drive through these steps using special tools.

We’re no strangers to Hitachi HDD recovery. Once we’d fixed the myriad problems affecting the client’s failed Hitachi hard drive, our Hitachi hard drive repair experts could start imaging its contents. Due to the drive’s firmware loading issue, it needed its hand held by our engineers through the whole imaging process. After carefully guiding the hard drive, our engineers successfully imaged 41.5% of the sectors on the hard drive’s platters. The remaining sectors were either empty (not part of the drive’s used area) or destroyed (due to the severe platter damage).

With 41.5% of the binary successfully read, our engineers could recover 95.6% of the drive’s file definitions. We had 86% of the known files on the disk fully recovered, including several of the client’s several mission-critical Outlook PST files. However, several other Outlook files could only be partially recovered. There were gaps in these partially-complete files which had corrupted the files prevented them from working. However, our technicians successfully repaired the client’s PST files, saving their most critical data.

A few of the client’s other important files lived inside their healthy SanDisk SSD. While the SSD was very sparsely populated, some valuable data had made it onto the drive. Thanks to their use of the SSD as a cache, storing frequently-used files for fast access, the client had a handful of the most recent revisions of their most recently- and commonly-used files on the perfectly healthy SSD. Our engineers combined the recovered data from both the repaired Hitachi drive and the SanDisk SSD. The results were good; we had recovered the client’s most important data. We rated this Hitachi hard drive repair case a high 8 on our ten-point case rating scale.