Who Gets Your Data After Death? Accessing and Managing a Deceased Person’s Digital Remnants 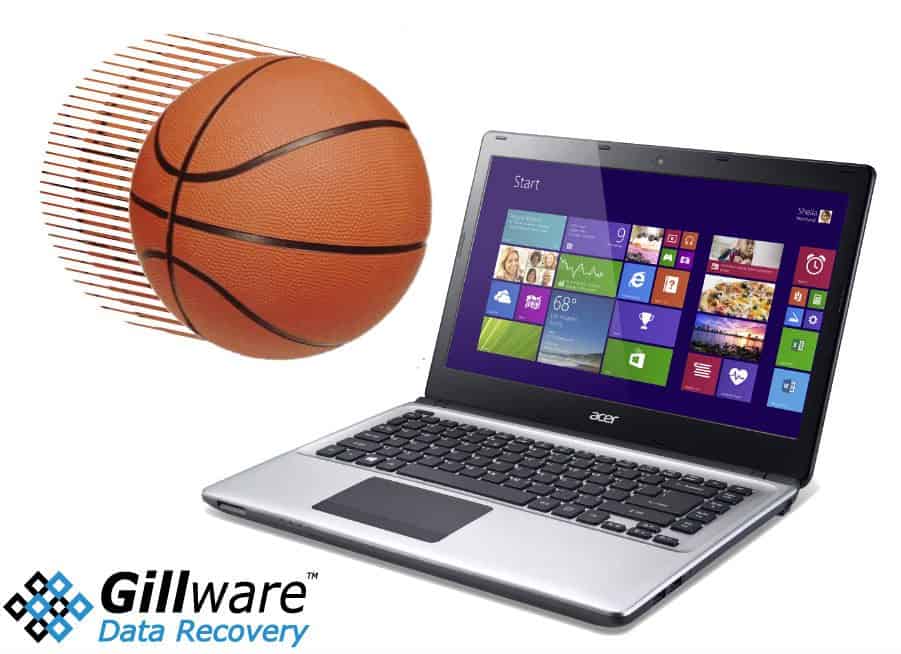 We’ve seen many a crashed hard drive come from dropped laptops. It just comes with the territory—a portable device with a small data storage device inside it, filled with sensitive moving parts. You drop it—it breaks (usually). What a relief that tablets, phones, and many laptops today use solid state memory instead! (It’s mainly because you can only make a hard drive so small, but the extra physical resilience helps.)

We also get failed hard drives from laptops that have had things dropped on them. From a hard drive’s standpoint, there’s not always much of a difference between dropping a hard drive and dropping something on a hard drive. Either way, a physical shock runs through the hard drive, disrupting its many sensitive components. Especially if the drive is still running, this usually leads to bad things happening. The consequence of these bad things: A crashed hard drive—literally—and data loss.

In this data recovery case, the object that hit the client’s laptop was a basketball.

Our client, the coach of a basketball team, had brought their laptop to practice and kept it on the sidelines, out of harm’s way. But accidents happen. One thing led to another, the basketball’s trajectory went rogue, and the laptop got a nasty whack. Externally, the laptop seemed unharmed—but later, when then the client tried to boot it up, they got nothing. All of their data was inaccessible.

Our engineers took a look at the client’s crashed hard drive in our cleanroom lab. What we found was a common culprit for a physical hard drive crash—the read/write heads.

No part of the hard drive is as hard a worker as the stack of read/write heads that sweep across the hard disk platters containing your data. In addition, no part, save for the sensitive surfaces of the platters, is as fragile. When hard drives suffer physical trauma, the read/write heads are the most common casualties. And when the heads fail, they can also cause some scraping and scratching on the surfaces of the platters, damaging the data living on the platters.

Our engineers carefully worked through the headstack replacement procedure to get the client’s crashed hard drive up and running again. The replacement heads, generously donated by one of the many hard drives we use for parts in our lab, worked like a charm. It was then that our engineers discovered yet another problem with the drive.

With the failed heads replaced, though, our engineers could use our special tools to fix the corrupted firmware and start pulling data from the client’s crashed hard drive.

Due to the damage to the crashed hard drive’s hard disk platters, our engineers couldn’t get a complete read on the client’s Outlook email archive, contained in a PST file. In its incomplete state, the file wouldn’t open. But this PST file, even incomplete, still held gigabytes upon gigabytes of important data. Using our tools to repair corrupt files, our engineers managed to successfully resurrect the damaged PST file.

After replacing the drive’s read/write heads and making fixes to its firmware, our engineers recovered 96.2% of the client’s files successfully. Nearly all of the documents and spreadsheets for the team they coached had been completely recovered and were fully functional. Our hard drive data recovery experts rated this data recovery case a 9 on our ten-point case rating scale.

Our client, the coach, came out of their hard drive crash smiling. They’d gotten nearly all of the data they’d lost back, so they wouldn’t be running into any further issues managing their team. And it was all thanks to the experts in Gillware’s data recovery lab.

What can we learn from this rather literal tale of a hard drive crash? The moral of the story: When you’re headed to any sort of event where there could be projectiles flying around… it might be a good idea to leave your laptop behind.