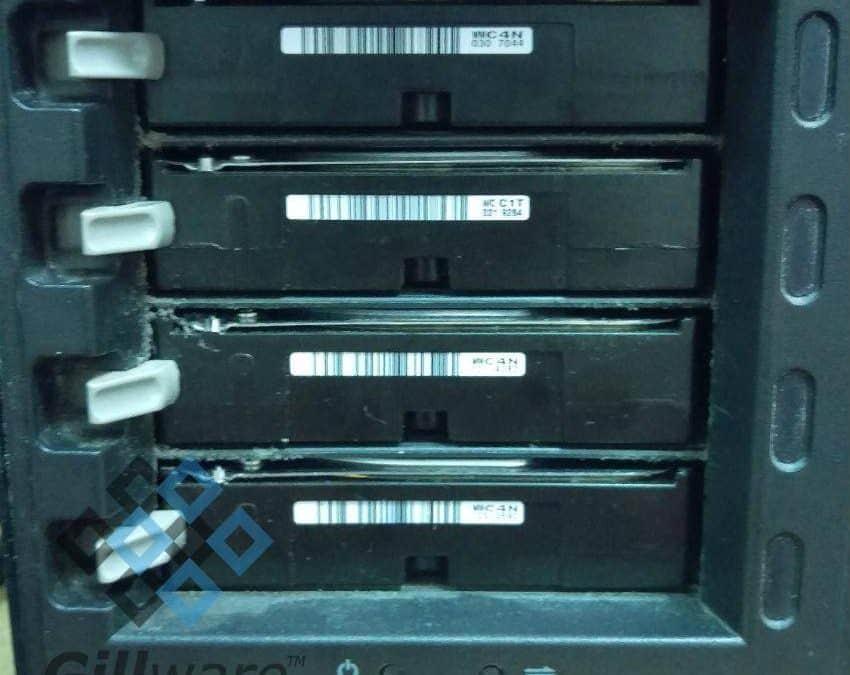 Drobo products and other NAS/SAN devices are a common case type for many of our small business clients.

The client in this data recovery case study had a Drobo unit on the fritz. The Drobo unit, a storage device produced by Data Robotics, could not be mounted on the client’s Mac. Drobo’s dashboard reported no failed hard drives, but Apple’s Disk Utility came up with an Invalid Node Structure error when trying to repair the volume. While the client could access the Drobo dashboard management software just fine, the device itself—and all the photos this professional photographer kept on the Drobo—were out of reach. The client turned to Gillware in the hopes that our Drobo recovery experts could make things right.

What Is an Invalid Node Structure?

Disk Utility error message: “Invalid node structure. The volume Drobo could not be verified completely. Error: Disk Utility can’t repair this disk. Back up as many of your files as possible, reformat the disk, and restore your backed-up files.”

Typically, the root cause of an Invalid Node Structure error is beyond Disk Utility’s means to fix. Unfortunately, it is a rather severe form of logical hard drive failure. Victims have had success fixing the problem with software data recovery tools such as DiskWarrior. However, in difficult situations sometimes data recovery software can hurt more than it helps, and some problems are severe enough that it’s best to leave things in the hands of experienced data recovery professionals.

Drobo Recovery: Into the Black Box

Drobo recovery presents some interesting challenges for our data recovery engineers (although they may have some different word choices than “interesting” sometimes). This is mainly because Drobo units rely on a variety of proprietary software and hardware. Proprietary systems make the mechanics of their operations very “opaque”. In science, computing, and engineering fields, this is called the “black box” approach to design, since you can’t easily tear it apart, look inside it, and see how it works.

Many external storage and NAS (network attached storage) units use common file systems, like NTFS, HFS+, Ext4, or ExFAT. These file systems are not only common, but also well-documented. The documentation makes it easy for our technicians to dig into their guts when things go wrong. Drobo units, on the other hand, have proprietary operating systems and file systems without a shred of documentation.

Even the method used to link multiple hard drives together in a Drobo is proprietary! Instead of using standard RAID levels like most NAS devices or multi-disk DAS (direct attached storage) devices, Drobo uses something they call “BeyondRAID”.

BeyondRAID has a lot of flexibility compared to other RAID levels. However, to achieve that complexity, BeyondRAID also works in a much more complex fashion. And, of course, there’s no documentation for it, leaving anyone outside of Data Robotics with little knowledge of how, exactly, it splices hard drives together.

Sounds like a headache and a half, right? Fortunately, our technicians have plenty of experience (some of it frustrating) with Drobo data recovery cases. The proprietary, “black box” designs of the Drobo unit can’t render data recovery impossible. Far from it, in fact—our Drobo recovery work has excellent success rates.

The thing about proprietary file systems and RAID levels is that your computer can’t make heads or tails of them. But then, how do you use devices with proprietary systems if your computer can’t even read them? The answer lies within the hardware itself. The enclosure itself is an interpreter, parsing the commands sent between the computer and the device and translating them from Apple-ish to Drobo-ese and vice versa.

For most Drobo recovery cases, the Drobo case itself helps our engineers peek inside the device. (In other words, the Drobo case is an integral part of a Drobo case.) After we create forensically-sound disk images of all drives in the array, we can slot them into a Drobo enclosure in lieu of the originals and use the enclosure to connect our fault-tolerant data recovery platform with the contents of the Drobo.

The four hard drives in this Drobo unit were fairly healthy, but had a handful of bad sectors. However, our Drobo recovery technicians found plenty of damage done to the hard drives’ directory structure. Without the directory structure, our engineers had to use raw recovery methods and scan for JPEG file headers to recover the client’s critical photos. All of the files the client had stored on the Drobo were lying around in a mess.

In the end, our Drobo recovery specialists successfully recovered over 14,000 JPEG photos and sorted them using their .,l EXIF metadata, making this Drobo recovery case a rousing success for our technicians.