If you’ve been following our case study blog posts, you’ve probably noticed that we publish a lot of case studies about recovering data from Windows computers. That’s not an indictment of your PC’s quality or propensity for failure. Windows PCs, like Seagates and Western Digitals, just occupy a much larger portion of the market share. Compared to top Windows PC vendors like Dell, HP, and Lenovo, Apple occupied 7.4% of the personal computer market share as of the first quarter of 2016. But rest assured, you can lose data from your Mac just as easily as you can from your Windows PC. And when that happens, know that our engineers are just as skilled in Mac data recovery as Windows data recovery.

In this Mac data recovery case, we had a client who’d uninstalled their OS X operating system so they could downgrade to a different version of OS X (they hadn’t had much of a good time with Sierra and wanted to go back to El Capitan). After going through the OS downgrade process, they realized that a ton of their personal files were missing. Most importantly, their family photos and personal documents had vanished. Fortunately, they knew just who to call: the Mac data recovery experts at Gillware.

Windows Vs Mac Data Recovery: Not So Different

Overall, data recovery from a Mac computer isn’t much different from data recovery from a Windows PC. Of course, your hard drive fails the same way whether it’s sitting in a Dell PC or one of Apple’s perennially Kubrickesque casings. But even on the logical hard drive failure side of things, the broad strokes remain unchanged (in much the same way that both American football and football everywhere else in the world both involve moving a ball from one end of a field to another).

Whether you’ve formatted a hard drive for Windows or Mac, its logical “skeleton” is essentially the same. You have a boot sector, which points to your partition information and all of the hard drive’s logical metadata, such as the superblock, file definitions, etc. One key difference between Mac and Windows PCs, though, is that Mac drives play a little trick with their boot sectors. This makes them show up as blank if you try to have a Windows machine read them. (Do it the other way around, though, and a Windows drive will just show up as “read-only” on a Mac.)

Like a Windows-formatted hard drive with the NTFS filesystem, a Mac drive (with Apple’s HFS+ filesystem) has a way to keep track of used areas on the disk platters, as well as file definitions. Just as an NTFS hard drive has its bitmap and MFT file records, an HFS+ hard drive has its allocation, catalog, and extents overflow files. The allocation file keeps track of the used area. The catalog file functions similarly to the MFT. The extents overflow file keeps a list of disk segments (extents) too large to fit in the catalog.

As we’ve explored in other O/S reinstall/upgrade/downgrade data recovery case studies, reinstalling an entire operating system can do a lot of damage to your hard drive’s logical “state of the union”. The footprint from the new operating system, like the footprint of Godzilla or some other monstrous member of his rogues gallery, can leave no small amount of damage behind.

In these situations, it takes very skilled data recovery engineers, with powerful analytical tools at their disposal, to sort through the debris and salvage whatever is left. The situation here was dire. The catalog files had been completely overwritten. Our logical Mac data recovery engineers had to carefully sift through the hard drive and sniff out the remaining files. By searching for valid file headers, like panning for gold in a stream running down the Rockies, we could turn up nuggets of digital gold for our client.

Our Mac data recovery technicians ended up uncovering over 49,000 valid and functional photos for our client. We also successfully salvaged over 3,800 documents of various types. It wasn’t everything—but for our client, it was more than enough.

Whenever you decide to upgrade, downgrade, uninstall, or reinstall your operating system, we can’t stress enough the importance of making sure you’ve successfully backed up your data. You may know exactly what you’re doing. You may know your way around an O/S reinstall like the back of your hand. But things can—and do—go wrong. When they do go wrong, you can count on Gillware’s data recovery services. But keeping your data safe and backed up is always worth the effort. 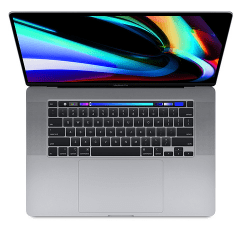 MacBook Pro: No Power, No Data