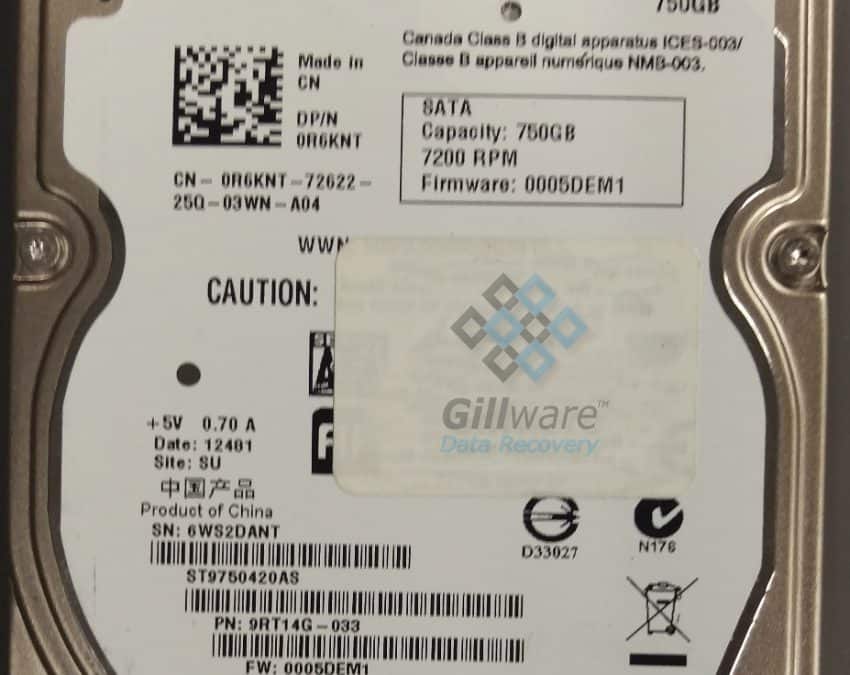 The client in this data recovery case study came to Gillware with an unreadable hard drive. When they went to plug the hard drive into their computer, the drive would spin up without any trouble. But the real trouble came later. The client could see the drive show up in Windows Disk Management as Disk 1. They could even see it in Windows Explorer as their E: drive. But despite having its own drive letter, the Seagate external hard drive was inaccessible. When the client tried to explore the drive, they encountered an error message: “E:\ is not accessible. The file or directory is corrupted and unreadable.”

The client saw this unreadable hard drive error message. While the computer could mount their hard drive, it could not read any of the files on the drive.

What can make an external hard drive corrupt and unreadable? As it turns out, a lot of things. There could easily be any type of issue causing this client’s hard drive failure, from a failure or corruption of the logical pathways the computer needed to follow to read data off of the drive to a failure of the physical components which store and read the data on the drive.

We needed our hard drive recovery engineers to take a closer look at this hard drive in our cleanroom. Even though there hadn’t been any obvious signs of hard drive hardware failure, you can never be too careful. The price of not being careful enough can be devastating.

Firmware and Heads: When Your Heads Can’t Shake Hands

Our cleanroom engineers found out that this drive’s read/write heads were in the very early stages of failure. The heads could barely read just enough of the drive that they could report back to the computer, “Yes, this is a hard drive” and the computer could assign the drive a directory letter. But that was it. These failing heads were simply too slow to handle any other operations at the computer’s pace. The heads’ faltering performance had also created a glitch in the drive’s firmware, the “operating system” of the hard drive with which the read/write heads must “shake hands” in order to access the rest of the data on he drive.

Our firmware experts accessed the unreadable hard drive’s firmware repaired the part of the firmware that had been corrupted. Afterward, our engineers hooked the drive up to our fault-tolerant HDD imaging system and got to work imaging the drive.

With HOMBRE’s ability to adjust the connection between drive and computer to account for hardware failures and performance hiccups, and its ability to target critical areas of the drive, our engineers could recover a significant amount of the client’s data without replacing the failing read/write heads. By targeting the client’s most critical files first, such as their Quickbooks file, our engineers could ensure that, even if the client’s hard drive’s condition went south in the worst ways imaginable, we already had their most valuable data fully recovered.

After reading 20.5% of the sectors on the drive’s platters, our engineers had recovered 74.2% of the total contents of the drive and 99.9% of the client’s most critical files. Their mission-critical Quickbooks file had been completely recovered and was fully functional. We rated this unreadable hard drive recovery case a 9 on our ten-point case rating scale.

Situations like this client’s are one of the reasons we at Gillware ask people to be very careful when using data recovery software tools. By all rights, this hard drive hadn’t seemed to have any glaring hardware malfunctions. It spun up, it didn’t make any unusual clicking or grinding or buzzing or beeping noises. A corrupt and unreadable hard drive could easily just be the victim of some logical corruption around key filesystem areas, such as the partition superblock.

But the hard drive had, in fact, suffered a minor read/write heads failure. And if the client had attempted to use freely available data recovery software to recover from what seemed to be a logical hard drive failure, they could have easily exacerbated the situation and turned a minor failure—which our fault-tolerant data recovery tools could work around—into a major failure characterized by mangled read/write heads or even rotational scoring.

When your hard drive fails, sometimes the culprit is obvious (you dropped it, it’s clicking or beeping, it won’t spin up, etc.). But in these murkier areas, you have to tread carefully. You can trust the data recovery experts at Gillware to accurately diagnose your failed and unreadable hard drive with our free data recovery evaluations.