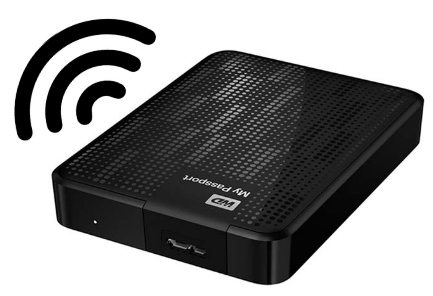 If you have a beeping hard drive, it’s time to stop panicking. The data recovery experts at Gillware are here for you. 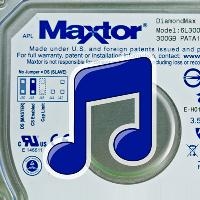 Long ago, Maxtor was a big player in the hard drive market, until they were acquired by Seagate in 2006. In fact, they were the third largest hard drive manufacturer in the world just before the acquisition.

While they still exist as a subsidiary of Seagate, you’d be hard-pressed to find anyone buying a Maxtor drive these days.

When they were still abundant, Maxtor hard drives had a peculiar and not particularly useful feature that both delighted and frightened consumers. Occasionally, if there was an issue with the drive, it would start to make sudden, rapid polyphonic tones like an old cellphone.

For anyone unaware of this feature, it was startling and unpleasant to hear, probably because most people buy their hard drives for storage rather than as a means to find a 1990’s ringtone.

In any case, this odd feature led to the spread of the name ‘musical Maxtor,’ a name that’s not been uttered in the mainstream for nigh on a decade now.  Here’s a link to a YouTube video where you can hear a Maxtor making its music.

Honestly, I couldn’t tell you why Maxtor chose to implement this feature. I suppose simply ‘because they could’ was enough justification. It’s hilarious in hindsight. In any case, while we can’t say why, we can certainly explain how.

The answer lies in the mechanism used to move the read/write heads back and forth across the platter. Inside a hard drive is a strong magnet, rigidly attached to the case. This creates a static magnetic field. At the end of the arm that holds the read/write heads, there’s a wound up coil of wire.

When current is applied to this coil, it generates its own magnetic field. This field acts against the static magnetic field created by the magnet. The force moves the arm that is mounted on a swivel and holds the read write heads on the end opposite the voice coil.

By varying the current to the arm’s coil of wires, you control the movement of the read/write heads.

The control is very fast and accurate. You can quickly accelerate the arm and very precisely control its location. This device – a loop of wire moving against a magnetic field as it is supplied current – is a voice coil. It got its name because it’s used to generate sound in speakers.

As it turns out, you can control the movement of a voice coil so well, that its back and forth movements create sound waves when connected to something that vibrates well, such as a speaker cone.

In the case of the musical Maxtor, the drive’s arm is getting a series of electrical pulses through its voice coil. These signals cause the read/write to vibrate, and you’re hearing the music.

If you were to have one of these Maxtor’s running without its cover on and you put your finger on the center of the spindle, you’d 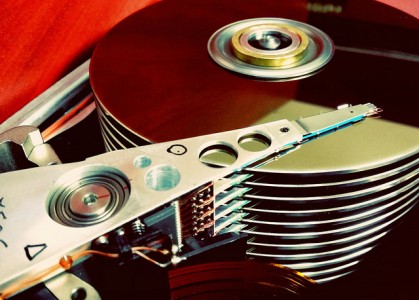 A close look at the actuator arm sitting over the platters. Photo credit: Bill Dickinson https://flic.kr/p/oj1L3f

hear the same tones. It’s the electrical signal the drive sends to the arm when it’s stuck, and it ends up sending the arm into song.

Other drives typically do not send electrical signals to move the read/write assembly when the platters are not spinning. If you were to experiment with a contemporary Western Digital hard drive for instance, you’d see that the drive waits to confirm that its platters are spinning at the correct rotational speed before it directs its read/write assembly to move. That’s a design that makes more sense to us.

Unique in Practice, Not Potential

Maxtor hard drives are not unique in their ability to make sounds with the voice coil. Any hard drive has the ability to turn musical. You just have to send an electrical signal to the voice coil that corresponds to whatever sounds you would like to make.

There are plenty of demonstrations on YouTube of people connecting speaker wires from an amplifier to a hard drive’s voice coil, and having the hard drive turn into a speaker. Obviously you shouldn’t try this if you ever hope to use the hard drive again or if you have any valuable data on it.

Apart from all drives being able to make music, to the best of my knowledge, Maxtor’s ARE the only hard drives that intentionally come with this musical feature. It seems an odd quirk of the tech industry that large corporations are able to get away with ridiculous things like a mainstream musical hard drive, but it’s a quirk I greatly appreciate. 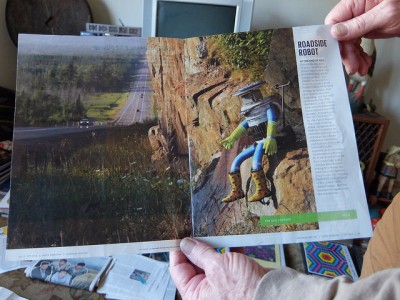 Fortunately, the spirt of ‘let’s do it because we can’ has yet to leave the tech industry. In one example, researchers in Canada recently developed a compact hitchhiking robot named hitchBOT, simply for the purpose of having a cute little robot make its way around the country (and Europe and Canada before that). Unfortunately, hitchBOT was mercilessly destroyed by someone grumpy in Philadelphia, but there are plans to rebuild it.

Another example from 2009: Google rented hundreds of goats to mow the lawn at their headquarters, rather than hire a lawnmower.

While it’s vastly misguided to attribute this cavalier, fun-loving spirit in the tech industry to Maxtor, since it was around long before them, it’s still nice to hear these stories about tech companies and enthusiasts that have some fun with their products. Maxtor may not be around in any real capacity these days, but fear not. We still have plenty of techies to carry the torch of tech-related hijinks well into the future.

Oh and P.S. Yes, Gillware is able to perform data recoveries on Maxtor drives (and pretty much all non-Maxtor drives).