Each day, Gillware’s engineers recover data from a variety of data loss situations. Seasonal spikes in data loss due to weather or other temporal factors result in noteworthy patterns in the types of cases that come in to our lab. For example, summer storms cause power outages and electrical surges, which can result in electrical failure and cause data loss.

Everyone looks forward to warmer temperatures and sunny days in the summer months, but the flipside to summer weather is an increase in frequency of severe weather. Summer storms are the cause of two of the most prominent seasonal data loss trends Gillware engineers see: electrical surges and power outages.

Electrical Surges: Electrical surges can be caused by lightning strikes during storms. Lightning sends high levels of voltage through power lines and can potentially damage electronics that are plugged into power outlets. When computers or servers are plugged in during a power surge, the device can be damaged in an instant, or the surge can degrade discrete electrical components that can lead to latent failures.

Surges can also be caused by large appliance motors cycling on and off, such as refrigerators or air conditioning units. Increased levels of household power usage can cause a brownout, meaning voltage temporarily drops, then rises again and often causes power surges. With air conditioners running frequently throughout the day in summer, electrical surges become more common and pose a threat to electronic devices.

Power Outages: Power outages during storms are also common, and can cause computers to shut down suddenly and improperly. If your computer shuts down unexpectedly, you could lose unsaved data from any open files you may have been working on.

Additionally, improper shutdowns can also cause a computer’s hard drive to fail. During a hard shutdown or forced shutdown, hard drives do not power down correctly causing the drive’s read/ write heads to improperly repark. This can damage both the heads and the platters, resulting in drive failure and data loss.

During summer, other weather events can occur that are less common but equally as threatening to the safety of your data.

Power Shortages: Excessive use of electricity on your local power grid can cause power shortages, leading to brownouts or blackouts, and resulting power surges. Power shortages can be caused by heat waves, when power usage increases due to high demand for air conditioning.

Floods: With snow melting and rain from summer thunderstorms falling rapidly, floods are common in the spring and summer months. Flood water in a house or basement can damage any electronics with wiring close to the ground or devices such as computer towers placed on the floor.

Fires: Droughts in the summer pose an increased risk of fires, especially in certain regions. Gillware sees a number of cases in which fire has destroyed a hard drive and caused a loss of critical data for a home or business.

Tornadoes: Spring and summer are also tornado season in some parts of the country. These destructive storms can take down not just power lines, but entire buildings and leave more than just a computer vulnerable to damage.

There are three major problems that can occur when electrical surges and power outages caused by summer storms cause damage to a hard drive:

When hard drives run normally, the platters spin and generate enough “wind” to keep the read/write heads hovering above their surface. However, when power is unexpectedly cut to a drive, the platters slow down and spin to a stop, suddenly removing the wind that keeps the heads off the surface of the platter.

This phenomenon is often times referred to as a “head crash”. During a normal shutdown, the heads repark back into place before touching the platter’s surface, but an improper shutdown could cause harmful contact between the heads and the platters. This can damage the read/write heads, or score the surface of the platter, causing the hard drive to fail and data to be lost.

When this occurs, data recovery engineers most often must replace read/write heads in order to recover the data. In extreme cases, rotational scoring on the platters may make recovery more difficult.

In a power surge, components on the control board of a hard drive can short out, such as a resistor or a fuse. (Figures 1 and 2) Damage in this situation is often times visible to the naked eye as the damaged components often times looked charred or burnt. Damaged electrical components can prevent a drive from powering up. 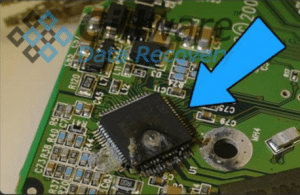 The read/write heads of a hard drive are very sensitive and handle very little power during normal operation. There are safeguards built in to a hard drive’s control board to prevent too much power from reaching the heads. In the event of an electrical surge, however, the protective components on the control board can be damaged, meaning voltage and current levels far beyond design specifications can reach the delicate read/write head assembly. 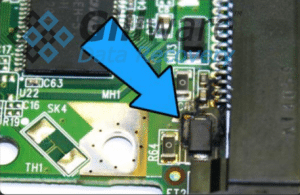 Both images show burned electrical components on the hard drive’s control board. This can be caused by power surges and can result in high levels of power reaching the sensitive read/write heads. Both control board issues and head failures can lead to data loss caused by electrical failure.

Although losing data due to hard drive failure resulting from inclement weather is a devastating experience, the recovery success rate in these situations is extraordinarily high. Regardless of the type of failure (electrical, mechanical or both), Gillware reports a better than 97% success rate in these cases.

While it is unfortunate that these situations do occur, the good news is that these cases are generally highly recoverable. However, to avoid such situations, there are a number of steps computer users can take to protect their equipment from damage and their files from data loss in the future.

In most cases of severe summer weather, data loss prevention is fairly simple. There are several steps you can take to avoid problems with electrical surges, power outages and other natural disasters that can cause data loss.

Use a Surge Protector

The easiest way to protect your electronics from unexpected power surges is by using surge protectors. Instead of plugging devices directly into an outlet, plug them into a surge protector, which plugs into a regular outlet. In the event of an electrical surge, the surge protector offers a layer of protection from the spike in voltage. It works by channeling the extra voltage through its grounding wire instead of to the devices plugged into it. This protects electronics from damage to wiring caused by power surges.

Power Down and Unplug Your Devices

Although surge protectors can help prevent damage due to minor electrical surges, surges caused by lightning during a storm are much stronger and often cannot be stopped by a standard surge protector. The safest way to handle your devices during a thunderstorm is powering down and unplugging them in order to isolate them from any voltage spikes that may occur due to lightning strikes.

In reality, the best way to protect your files from data loss in any situation is by using a reliable, cloud-based backup solution. Online backup stores your files offsite so there is no risk of data loss due to things like electrical surges, fires or floods. Having a backup strategy will help you recover from any data loss situation easily.

While summer weather may not be avoidable, data loss disasters are preventable. There are simple measures that can be taken to avoid hard drive failure due to electrical surges and other weather related situations. By powering down and unplugging computers during severe weather and using proper surge protection, you can keep your hard drive protected from failure.

The most reliable way to preempt data loss, regardless of the cause, is backing up your files using a secure, offsite backup solution. The same disasters that can cause you to lose your files on your computer can cause you to lose your backed up files if you use physical storage devices like flash drives or external hard drives. Take preventative and protective measures to avoid data loss before it’s too late.