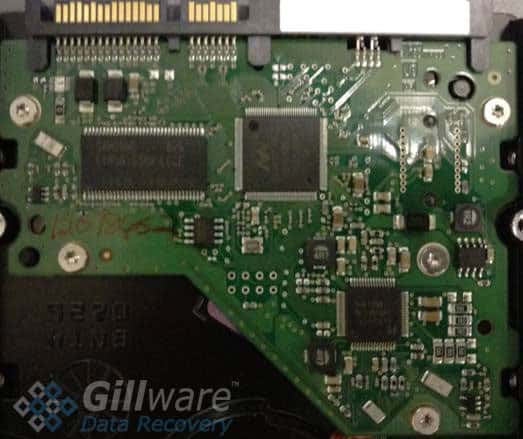 The PCB control board from a Samsung HD204UI 3.5” desktop hard drive. While many models of hard drives today have the board facing “up” (toward the drive’s chassis), in this model the PCB faces “down” and all of its components are clearly visible.

Data recovery involving a failed hard drive PCB used to be simple many years ago, when hard drives had simpler and less sophisticated designs. There was a time when any two hard drives made by the same manufacturer, with the same model number, would have more or less identical control boards. The two could be swapped in a matter of minutes to breathe life back into a dead hard drive.

But once hard drive capacity grew and the methods for storing data on the platters became more complex, each drive had to be calibrated individually. Many of these unique calibration parameters had to be stored somewhere on the PCB itself. These individual calibrations that make any hard drive’s control board so different from its otherwise-identical brethren and vex people with “do-it-yourself” data recovery aspirations are contained in its ROM chip.

As a result, while two control boards may appear to be completely identical, merely taking a PCB from a functional hard drive and using it to replace the failed hard drive PCB will give you… a failed hard drive. You may even cause further mechanical damage to the hard drive by saddling it with an incompatible board. If the hard drive gets confused about how it should be calibrated, it could tell its read/write heads to do something they shouldn’t and cause damage to the drive’s heads, firmware, or platters. 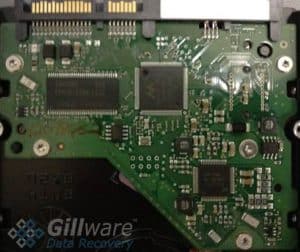 The failed hard drive PCB control board from a Samsung HD204UI 3.5” desktop hard drive. While many models of hard drives today have the board facing “up” (toward the drive’s chassis), in this model the PCB faces “down” and all of its components are clearly visible.

The PCB carries this electrical current to the spindle motor, which starts the platters in most modern hard drives spinning at 5400 or 7200 of revolutions per minute. Some of the older models we occasionally see at Gillware spin at 4500 RPM, and some special models of hard drives spin at 10,000 or 15,000 RPM.

The heads unpark from their rest position, fly across the platters, and begin reading the drive’s firmware. Once the heads and the firmware have shaken hands, the hard drive is ready to work. This whole process happens in a matter of seconds.

When a hard drive fails mechanically and needs to be brought in to our cleanroom for data recovery, it is because a link in this chain of interface-to-PCB-to-motor-to-platters-to-heads has broken. When a hard drive’s PCB fails, power will flow through the drive’s SATA or USB connection, reach the failed hard drive PCB, and… nothing. The chain ends there. The electrical current can’t make it to the spindle motor, so you end up with a hard drive that’s not spinning.

In extreme cases, a failed hard drive PCB can actually cause damage to a computer’s power supply or other hardware components when plugged in. Every once in a while our engineers here at Gillware will encounter a “smoking” hard drive whose PCB has short-circuited. When plugged into the client’s computer, it would actually overload the power supply.

Our cleanroom data recovery engineer Kirk made the necessary electrical repairs to the failed hard drive PCB and was able to get the drive up and running properly again. This is a delicate procedure. If done improperly, the ROM chip could become damaged, and the unique calibrations the hard drive needs on record in order to function properly could go up in smoke and make data recovery impossible. As with any other procedure done to a failed hard drive, this should only ever be attempted by a skilled and well-trained data recovery professional who knows their way around a PCB.

After the matter of this Samsung external hard drive’s failed control board was addressed and the drive was repaired, our data recovery engineers were able to read the entire used area on its data storage platters without encountering any bad sectors. Because we recovered all of the user’s critical files, we rated this case a 10 on our ten-point scale.