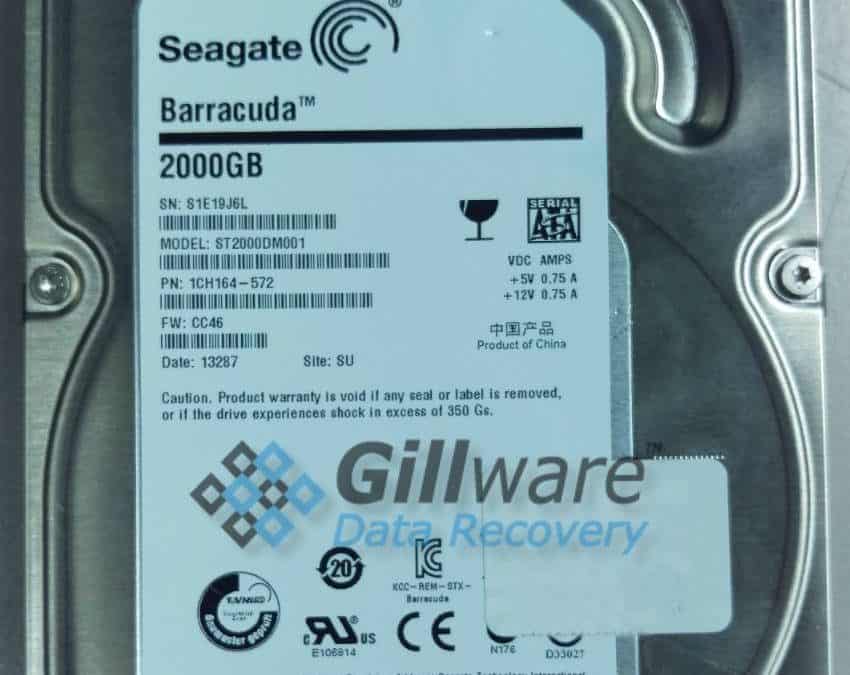 The client in this data recovery case came to us for our Seagate NAS recovery services. This client had been using their Seagate Central NAS device for remote storage. Over time, the device had started to behave oddly, intermittently refusing to function and cutting the client off from their data. Eventually, the Seagate Central device just stopped working entirely, leaving all of the client’s data inaccessible. This client was a professional artist, and the NAS held much of their work. In a situation like this, our client couldn’t have made a better choice than Gillware for their Seagate data recovery needs.

NAS (network-attached storage) devices are a bit like external hard drives, only instead of connecting to a computer via USB cable, they plug into the user’s router instead. With a NAS device, the owner can access their files over an Internet connection, without needing to tether their files to a single computer. A NAS device will often have two or more hard drives inside it, as this one did. These drives are typically connected in some form of RAID or JBOD configuration.

Inside these NAS devices you can find a lot of the same hardware you’d find inside a computer, and so NAS devices have many points of failure besides their hard drives. When our engineers took a look at the two drives pulled from the client’s NAS, though, they found that the fault for the device’s failure lay in one of the hard drives.

One of the two hard drives in this Seagate NAS recovery case was perfectly healthy, but the other had failed. The failed hard drive had picked up a bug in its firmware.

Every time you turn a hard drive on, it looks to the firmware for guidance before it does anything else. When a hard drive’s mechanical components start to get old, it can have a very negative effect on the drive’s firmware. Hard drive firmware, among its many other important functions, keeps records of sectors on the platters that have become unusable. To write data about these sectors to its records, the hard drive has to use the same wearing-out set of read/write heads, which can lead to that part of the firmware becoming corrupted.

In this case, the drive’s read/write heads had likely started hiccuping, causing the intermittent accessibility issues the client noticed and, eventually, corrupting part of the firmware and causing the hard drive to suffer the equivalent of a kernel panic.

To repair firmware, our engineers must use special tools. The section of the hard drive containing its firmware is inaccessible by normal means, as hard drive manufacturers don’t want people fooling around with such a delicate and critical part of the drive. A seasoned and experienced data recovery expert must carefully analyze the firmware and fix the corrupted parts in order to get the hard drive up and running again.

After fixing one of the two hard drives, our engineers had to put the two drives together. When a NAS device has two or more hard drives, they are typically linked together in a RAID configuration. Commonly, two hard drives will be connected using RAID-0 striping or RAID-1 mirroring. RAID-0 cuts the drives into “stripes” and writes data to both drives in chunks. This improves capacity and performance, since the user can read data from both drives at once. RAID-1 makes both drives identical twins, so that if one drive fails, the user doesn’t lose any data.

The client in this Seagate NAS recovery case, however, wasn’t using either RAID array. The two hard drives in their Seagate Central device were spanned together. Instead of having the drives cut into stripes and stitched together, the device simply stitched the back end of one drive to the front end of another. This type of “spanned” array is sometimes referred as a JBOD (or “just a bunch of disks”) to distinguish it from a RAID (a “redundant array of independent disks”).

Our logical engineers put the two hard drives together and successfully recovered the vast majority of the client’s data. Only a handful of the sectors on the failed drive had gone bad. The bad sectors scattered throughout the array hadn’t impacted any important files. Our engineers rated this Seagate NAS recovery case a high 9 on our ten-point case rating scale.