Not All Data Lost on Western Digital with Platter Damage 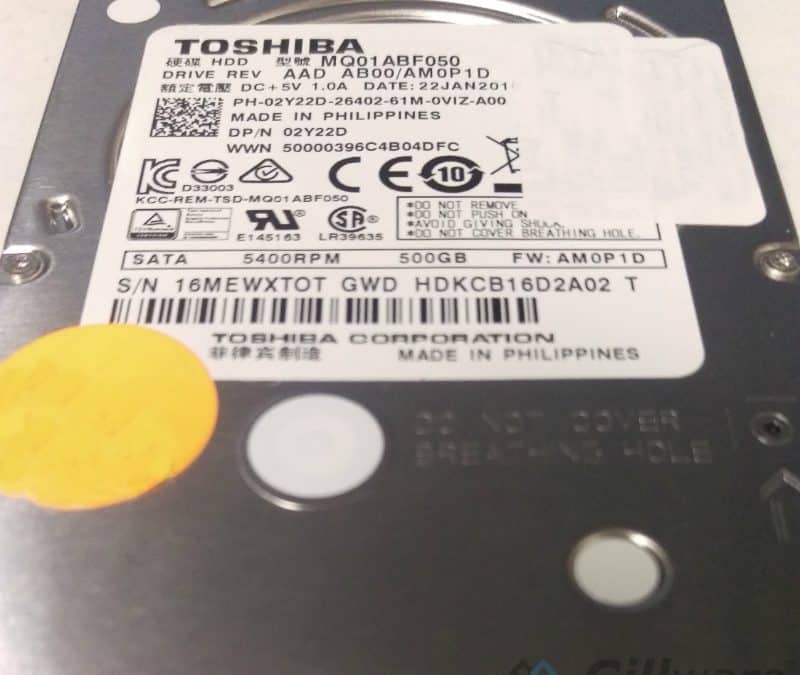 When your computer freezes or crashes, it’s usually just a minor annoyance—although it can be a major frustration if you’ve gone a few hours without saving your work. But sometimes things go really wrong, and your computer won’t boot afterward. Sometimes, as in this data recovery case, the hard drive itself has failed. When this client’s Dell Inspiron 15 laptop crashed and stopped booting up, they came to us for our Toshiba hard drive recovery services.

In general, the boot device is the hard drive or SSD with your operating system on it. When you boot from the drive, the computer reads the necessary O/S data and leads you through the usual startup routine. If the boot device has failed somehow, though, then obviously your computer won’t have anything to boot from. For Dell computers, if something (like O/S corruption or hard disk failure) prevents the system from accessing necessary boot files, an error message such as “Cannot start windows. Reinstall with disk. Error (0x8007002). Cannot find \BOOT\BCD” may appear.

Our data recovery engineers pulled the hard drive out of the client’s Dell Inspiron laptop and assessed its condition as the first step in our Toshiba hard drive recovery efforts. It seemed to be in good physical shape, so our engineers handed the drive off to our logical technicians.

Our logical data recovery technicians figured out why this client’s Dell laptop couldn’t boot from their Toshiba hard drive. The drive had suffered a logical failure, rendering its contents invisible to the computer.

More Than One Way to Skin a Cat… Er, Damage a Hard Drive

At Gillware Data Recovery, our experts define two categories of hard drive failure. The first category is physical failure. A physically failed hard drive can have a burned-out control board that needs replacing, or crashed read/write heads, or a stuck spindle motor, or some lovely combination of errors. These cases of physical failure are the cases that usually require surgery in our cleanroom. This is the easily-dramatized nitty-gritty mechanical work. When people think about data recovery, they usually think about the engineers at our cleanroom benches digging into their hard drives’ guts.

The other category is logical failure. This is what happens when the set of instructions the hard drive needs to access your data becomes garbled or partially erased. The data inside your hard drive has to be organized in a specific way in order for your computer to find it. Things like the boot sector and partition table, superblocks, and file definitions point the way to your files. If any of these things become corrupted or a link in the chain goes missing, your data becomes inaccessible.

Logical damage can happen as a result of human error, such as in cases of accidental reformats, O/S reinstalls, or accidental file deletion. It can also happen if the hard drive just makes a mistake over the course of its normal operation. If logical damage affects a key part of the drive, it can lock the user out of all of the data on their drive.

Of course, it is entirely possible for a hard drive to have suffered both physical and logical failures. A physical failure such as degraded read/write heads or damaged platters will almost always have an adverse, and sometimes even irreversible, effect on a hard drive’s logical status.

Recovering Data After a Logical Failure

With our forensic hardware and software tools, our logical technicians are very good at snooping around inside failed hard drives, even if their data isn’t accessible via normal means. After creating a full forensic image of the failed Toshiba hard drive, our technicians assessed the extent of the logical damage.

There were a lot of lost folders, so the user-created files our engineers recovered were in total disarray. However, our engineers found that the vast majority of recovered files were functional, albeit haphazardly arranged. We had completely recovered over 1,300 of the client’s vacation photos with no corruption.

While we couldn’t restore the missing portions of the directory structure, we could still save the client a lot of hassle and prevent them from having to paw through irrelevant data to find their important photos by organizing them ourselves once we had completed the recovery. We rated this Toshiba hard drive recovery case a 9 out of 10 on our rating scale.