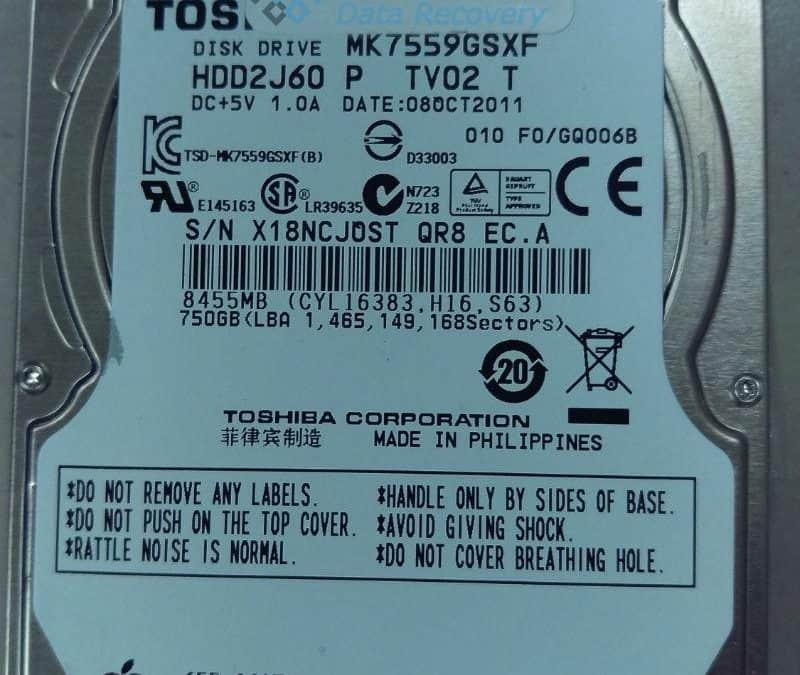 The client in this FileVault data recovery case study ended up in hot water when they decided to encrypt the data on their Macbook. The FileVault encryption process started up as normal and started implementing its full-disk encryption. And that’s when things started to heat up.

The client’s Macbook crashed roughly halfway through the encryption process. This left a portion of the client’s data encrypted with strong 256-bit AES encryption, and the rest unencrypted. Worse, the client couldn’t even log into the Macbook anymore. They were stuck. Three hours on the phone with Apple produced no results. The client consulted with a local computer repair technician, who determined that the problem lay within the computer’s Toshiba hard drive.

Software diagnostics pronounced the drive as failing. Several attempts to pull data off of the hard drive proved fruitless. Each attempt ended with the drive crashing well before any data could be pulled off from it. Both the client and the technician noticed that the drive was very hot to the touch, and sought the expertise of a professional data recovery lab to deal with this situation.

How Hot is Too Hot for Hard Drives?

Hard drives can and do overheat, although it’s not as common as you might think.

Hard drives can typically take heat of up to 60 degrees Celsius (140 degrees Fahrenheit) before their safety becomes compromised. Of course, the temperature around your computer, be it on your desk or on your lap, rarely reaches such heights. But inside your computer is another story. Hard drives generate their own heat. As a result, a drive in a poorly-ventilated machine can bake itself to death since the heat generated has nowhere to go. When this happens, it sometimes results in the drive’s spindle motor seizing up as its lubricants dry out.

Most people, though, don’t realize that it’s normal for a running hard drive to be quite hot to the touch, especially if you keep it running for a while. Most of the time, when we’re using our computers or external hard drives, we aren’t cradling their HDDs in our hands as if it were a newborn infant. Generally the only time you’d do this is if your hard drive is acting up and you’re trying to diagnose it or pull data off of it. The drive will become very hot, and you might think that something must be wrong with it.

Hard drive overheating is mainly a concern for servers, since even a well-ventilated server has several (or several dozen) hard drives in close proximity to each other, all generating their own heat. This is why data centers depend so much on air conditioning. These massive server rooms are frigid; that’s what it takes to offset the massive amount of heat created by hundreds (or possibly thousands) of hard drives running in unison. At Gillware, for example, even our far more modest server room has the air conditioning on 24/7/365 (even in the dead of our chilly Wisconsin winters!).

Our engineers brought this hard drive into our cleanroom data recovery lab to provide an expert diagnosis. We found that the hard drive’s heating issue wasn’t quite as bad as it seemed. The hard drive was just having trouble keeping up the pace with the demands of the rest of the computer.

In other words, this hard drive had entered the middle stages of hard drive failure. It had failed enough that it was no longer accessible. However, it hadn’t catastrophically failed such that its mechanical components had broken down. In our engineers’ deft hands, our own proprietary, fault-tolerant hard drive data recovery tools could create a perfect disk image of the failed hard drive.

With that taken care of, the disk image went to our encrypted drive recovery specialists. This hard drive was a patchwork of encrypted data and unencrypted data. Some of the drive’s system files user data was plainly visible; the rest, hidden behind a shroud of powerful FileVault encryption. Our technicians needed to decrypt the encrypted portions of the disk and stitch the data back together.

After decrypting the roughly half of the disk encrypted by FileVault (using the client’s password, of course), our technicians successfully retrieved all of the client’s important files, including their documents and, most important of all, their precious family photos. We ranked this FileVault data recovery case a 10 out of 10 on our case rating scale.