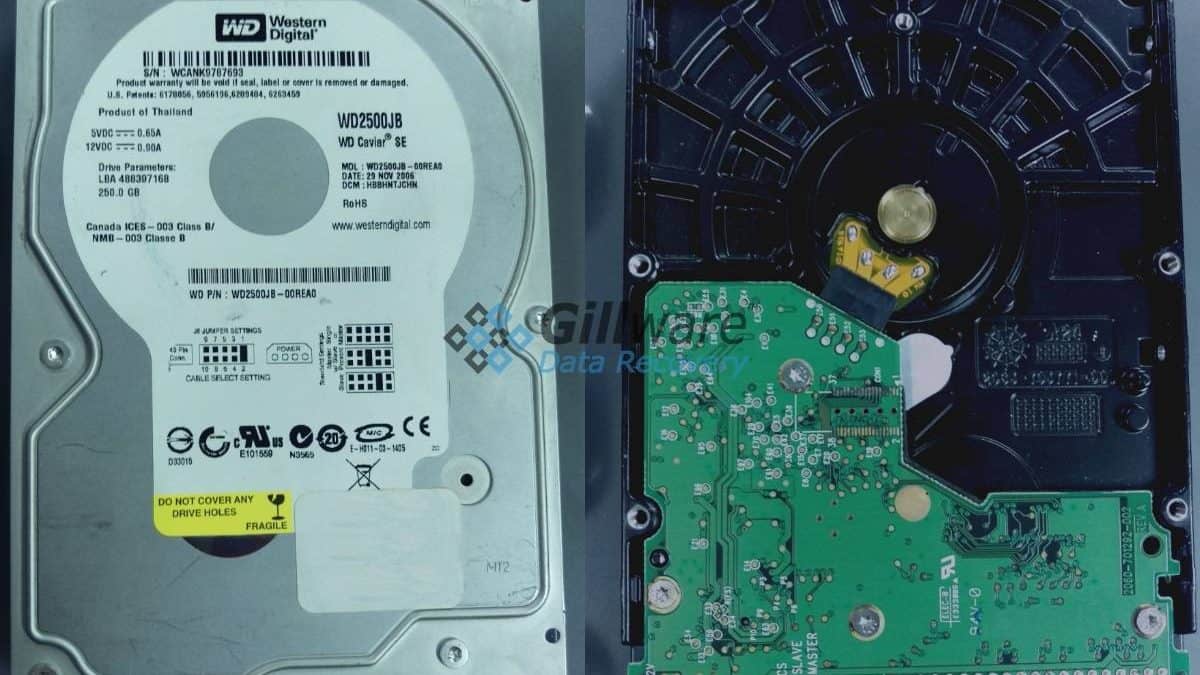 Our engineers found that the client’s Western Digital hard drive wasn’t receiving any power. Normally, when you turn on a hard drive, electricity flows through its control board and runs into the hard drive, turning its spindle motor and filling its other internal components with life. But if something bad happens to the board, the electric current can’t make it to its destination. Our engineers noticed trace amounts of liquid residue on the board, indicating that at some point, the PCB had been exposed to water or some other liquid. Liquids and electricity, generally speaking, do not play well together. Liquid on the board had caused an electrical short, burning it out. We needed to replace the PCB. But that was not a simple task.

Hard disk drives are complex creatures. The inner workings of your hard disk drive are the result of over half a century of innovation. We’ve gone from hard disk platters the size of vinyl records carrying a few megabytes of data to platters 2.5 inches in diameter carrying terabytes of data. You can make things smaller. You can make things more powerful. And when you do both, things become much, much more complicated.

Inside your hard drive, its components have only gotten more complex as time and technology march on. Hard disk drive manufacturers continue to find new ways to pack more and more data into the same size of hard disk platters. As the areal density of the platters increases, the tolerances for the read/write heads become thinner and thinner. The more complex their inner workings become, the greater the effect of even slight manufacturing variances between otherwise-identical hard drives become. Hard disk drives are all individually calibrated right off of the assembly line to deal with their uniqueness. All of these calibrations end up on a ROM chip on the control board.

When a hard drive PCB fails, our engineers must take this into consideration. You can’t just take the board from an identical model of drive and slap it on—even if they look exactly the same. While power will flow through the board and into the hard drive all the same, you’re missing a crucial ingredient. Without the proper calibrations to guide them, the drive’s read/write heads just won’t work properly. Without the proper calibrations, the hard drive’s internal components may actually fail, making the situation even worse! To repair hard drives with failed control boards, our engineers must carefully replace the donor board’s ROM chip with that of the failed board.

Our data recovery engineers successfully replaced the shorted PCB on this client’s Western Digital hard drive. The donor PCB, with the original drive’s calibrations on its ROM, worked like a charm. No further problems presented themselves after we dealt with the drive’s failed circuit board. After the successful hard drive PCB replacement, our engineers could start salvaging the client’s critical data.

This case was a near-complete recovery. Our engineers fully recovered 99.7% of the user’s files, including their Oracle VDI files. Virtual machines contain a lot of data in very large files, and when recovering them, it is very important to make sure no irreparable corruption has occurred. While checking for any evidence of file corruption, our engineers found that the client’s Oracle virtual desktops were fully intact. We rated this VDI recovery case a 9 on our ten-point rating scale.

Unfortunately, virtual disks are only as safe from harm as the real hard drives they’re stored on. Virtualization is an extremely useful tool that has allowed businesses and other organizations to avoid painful downtime and reduce overheads. But even though virtualization can save businesses from data loss, virtual machines and virtual disk images are still vulnerable to failure. Gillware has seen more than its fair share of crashed hard drives and servers containing critical virtual environments. Virtualization in and of itself is not guaranteed protection from data loss. A good data backup plan is essential for preventing these kinds of situations.