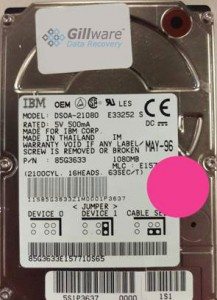 This client came to us with an ancient hard drive they’d had removed from an equally-archaic laptop and a story they needed to tell. Back in the 1990s, this client had written a screenplay for a rather unique-sounding conspiracy thriller. To their surprise, they found a conspicuously-similar script floating around the industry.

The client suspected someone had seen his script, copied his ideas, and passed them off as their own. But in order to prove this, the client needed something that would show that he’d made the original document back in the mid-90s. He brought out the mothballed old laptop he’d written the screenplay on and searched through it for his original script. Shockingly, he found that his work was nowhere to be found. The client had no idea how the data on it could have vanished. They did not rule out the possibility of sabotage.

The drive was still perfectly functional. This is a rare sight—a consistently-used hard drive will usually last less than a decade. This hard drive had not been used consistently. The laptop containing it had probably spent most of its time sitting in a drawer for the better part of the last twenty years. At Gillware, although we occasionally see ancient hard drives such as this IBM laptop drive, in most cases your typical twenty-year-old hard drive has probably failed ten or more years ago. If you’ve gone without your data for a decade, it’s likely you don’t really need it back anymore.

Our data recovery engineers made a complete image of the client’s hard drive for logical analysis. This did not take very long, as the hard drive’s total capacity was a little more than a single gigabyte. We sent a list of what our engineers had turned up in their analysis to the client, and our customer service representative Nick assisted the client in combing through the results.

Neither Nick nor the client could find the screenplay. However, in browsing the list of recovered data with the client, something caught Nick’s eye—records of an iOmega device in the drive’s detect log. 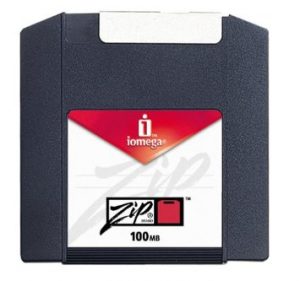 You can still buy iOmega’s zip disks on Amazon, if you’re into retro tech. (source)

Back in 1994, iOmega (now known as LenovoEMC) released a now-obsolete piece of technology known as a zip drive. The zip drive was a type of floppy drive that competed with other floppy disk readers. It was never especially popular, but saw use writing to and reading from high-capacity “superfloppy” disks that, at their zenith, could rival rewritable CDs in storage capacity and beat them in convenience.

Floppy disks were cheap, convenient for portable data storage, and saw widespread use until USB flash drives started to take over the market. Today, floppy disks are a quaint part of ancient history.

It appeared the client had used an external zip drive connected to their laptop and had been saving their screenplay directly to a superfloppy disk, instead of saving it directly onto the internal hard drive. The data wasn’t lost, just living in a different, ancient storage location. Thanks to our customer service representative Nick’s keen eyes and experience, he was able to point our client in the right direction to find his screenplay.